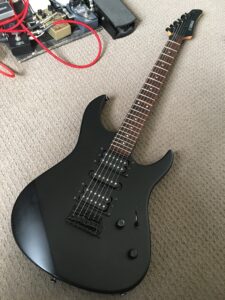 It’s been a pretty crazy last couple of years, with bushfires here in Australia, followed by a once in a century pandemic. Here in Canberra we’ve been relatively lucky on the pandemic front, until recently, where our city has been in lockdown for a couple of months now. I’ve been working from home since early 2020, so it hasn’t been too much of a change for me, except now it has been a very long time, and it’s easy to lose motivation and focus.

Lockdown has meant that I’ve spent more time playing guitar, even if just casually, since I’ve been working from the same space that my music gear occupies. It’s been nice to just noodle away whilst taking a break, or nutting out a work-related problem in my head. There hasn’t really been any projects on the bench though, too much going on in real life to have money aside to put towards gear, plus I probably have enough guitars! That’s not to say I wouldn’t be interested in any other guitars, maybe a little different to what I already own.

One of the things I typically do to pass time is browse good old Facebook Marketplace. Sometimes for things we need for the house, or just for fun. I was browsing a couple weeks back, and 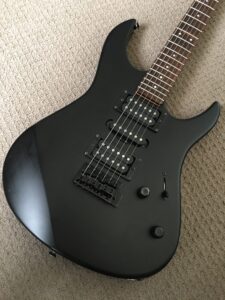 stumbled upon a post for a free Yamaha electric guitar. Now I have known for years that Yamaha guitars have punched well above their price-point. Back in the day, my guitar teacher was a huge advocate for the Pacifica range. I have always liked the look of many of them, but the nut has always put me off, being so narrow. I always liked the look of the RGX series, and their various incarnations over the last few decades, and this ad happened to be for some sort of RGX model. There was no specific model number listed, and it was covered in stickers, but for free, and being within my neck of the woods, as well as being a little bored while in lockdown, I inquired, and managed to land it. I organised a contact-less pickup, and brought the new Yamaha guitar home.

After doing a thorough clean and de-stickering of the guitar I set about working out what I had in my possession. The headstock listed it as an RGX 121 SJ, and had a serial number, so that was a starting point. A bit of Google-ing and contacting Yamaha provided me with the details.

The RGX 121 SJ has an Alder body, and a maple neck with rosewood fretboard. The radius of the board is a relatively flat 350mm or 13-3/4″, making the guitar feel like a nice in-between to my Ibanez RG type guitars, and my various Stratocaster type guitars. It comes equipped with a six point vintage Stratocaster style vibrato bridge with bent steel saddles, regular die-cast tuners, and a set of ceramic H-S-H pickups. The satin black paint reminds me of my old Ibanez RGR 1570, which I moved out of the stable several years ago when I needed to thin the heard a bit.

It’s a budget model, but in typical Yamaha fashion, plays far better than it’s price point should suggest. Traditionally I’ve loved playing Ibanez RG series guitars, and more recently I’ve been playing my Stratocaster style guitars, whether it’s one of my two custom builds, or my two Squiers. The RGX feels like an amalgamation of these two styles. The fretboard radius sits practically in the middle of the two types of guitars, the electronics setup is all RG, and the body wood, and six point vintage bridge is straight out of the Stratocaster’s wheelhouse.

Suffice to say, it’s actually been a ball to play. I feel right at home on this guitar neck, it’s been easy to get relatively good action without getting too carried away with set up right now, and the stock pickups are fairly serviceable. Being a lower end model, there are a few caveats though. The nut seems a little off, and strings can pop out of their slots if you’re not careful. The G string is especially a problem, since the headstock has no real angle to it, like a Stratocaster, and the Yamaha only came with one string tree, covering the B and high E strings. I didn’t get a tremolo arm with the guitar either, so I’m not sure how well the guitar would stay in tune with some abuse. I’m confirming what size arm fits, since the ones I have on hand are either too small or too large, and will hopefully get one soon. 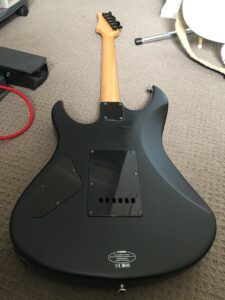 I’m not quite sure what I’ll do with this guitar. It could be quite easy to go down the rabbit hole, like I usually do, and modify this one up, especially since I already have things like spare pickups on hand. My youngest has mentioned that he might like to learn too. He’s been teaching himself a little bit of keyboard, so we’ll see if he might like to hit up the guitar too. I may just finish fixing it up and move it on, since I have so many guitars already. It is so enjoyable to play though, so it may stick around. I may just have to keep things simple though, and work mostly with what I’ve got on hand, other than maybe replace the nut, and either put some washers to space the tuners off the headstock a little to help break angle, or go down a budget tuner route like I did with my Squier Bullet Strat project.

At any rate, it’s been fun to have a new guitar to play with, so I guess keep posted here.  I’m planning to get some more content going on my blog soon, since it’s been a while. Life always has a way of occupying time, but I’ll be aiming to get back onto some semi-regular posts where possible.