You are here: Home › DIY › Yamaha RGX 121 SJ project – the first round of tinkering 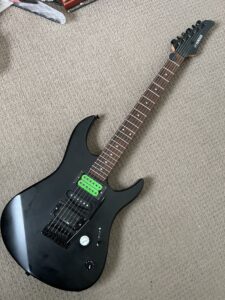 I realised after receiving a comment regarding finding a whammy bar to fit my Yamaha RGX 121 that I hadn’t provided any updates since posting my new guitar day post! I got stuck into some modifications pretty much soon after I posted about the guitar, almost all of them coming from some rummaging through my parts box.

As mentioned previously, the RGX 121 is a damned fine guitar, exceeding it’s price point like Yamaha guitars tend to do. But there’s always room for improvement, especially in lower end guitars.

First up was looking at the electronics. The stock pickups are functional, but nothing to really write home about. Another issue was the pickup selector switch. It was a little loose and finicky, so it needed to be switched out as well. On hand for the bridge position was an IBZ/USA F2, a DiMarzio made humbucker that was developed for Ibanez in the late 1980s. To learn a bit more about my thoughts on the IBZ/USA F2 check out my More meddling with the DiMarzio Tone Zone post. 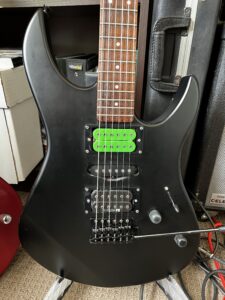 For the neck position I had a green DiMarzio PAF Pro, lifted out of an old Ibanez Jem 7VBK as I understand. I reviewed the PAF Pro way back in the early days of my blog, and found it to be an absolutely killer pickup in the neck position.

I got on to installing these, along with a spare 5 way switch I’d pulled out of another guitar at some point. I also swapped out the volume and tone knobs with some spare Strat style ones, as they are my preference too. The pickups transformed the sound of the guitar, with the IBZ/USA F2 absolutely slaying for heavy riffage in drop Db. The PAF Pro is such a beautiful neck pickup for silky smooth lead guitar work, as well as cleaning up nicely for softer passages.

I mentioned in my initial post about the RGX 121 that I needed to source a whammy bar, since nothing I had on hand fit it. I contacted Yamaha Australia and they were able to confirm some specifications, including the diameter of the whammy bar being 5mm. I ordered one off eBay, and now I’m able to go to town with the floating vintage style six screw bridge. There’s a little bit of tuning instability, which I’m just trying to determine whether or not it’s the stock nut or tuners causing the issue. The nut has been lubed, so I’m assuming it’s the tuners, but both items may be worth changing out for something better. 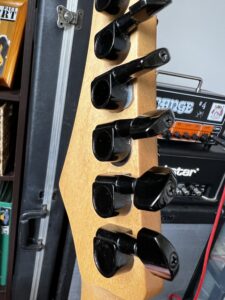 On the subject of the tuners, I’d mentioned in my initial post about the guitar that there were some issues with regards to the strings popping out of their spots in the nut due to the lack of angle on the headstock, and no second string tree for the G and D strings. Before buying new tuners, I remembered a trick that my old guitar teacher had shown me many years ago.

To increase the break angle without adding string trees, or getting tuners with lower posts, etc, he simply put some washers in behind the tuner on the back of the neck. This pulls the base of the tuner a little from the neck, and lowering the tuner shaft in the process.

I rummaged through my parts to see if I had any washers on hand, and found two that would work nicely, a thicker one for the G string, and thinner for the D. After adding them the issues with the strings popping out was completely eradicated. As mentioned above, there’s still some tuning instability when using the whammy bar, but I might start with replacing the nut with a Graphtech item first, and maybe do the same with the string tree too.

It’s always nice to improve upon a guitar, and even better when it is done simply by rummaging through a spare parts box.  The RGX is now far more playable, and sounds incredible to boot! I dare say that there may be some more changes on hand, even if it’s just the nut and string trees, but as it stands the guitar is a joy to play, and it has inspired some new music along the way.