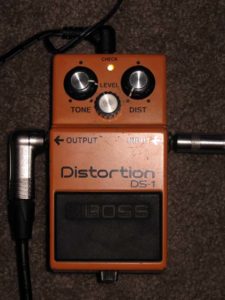 In part 1 I installed a selection of capacitors to sort out the noise issues commonly associated with the stock Boss DS-1 Distortion pedal. The next stage of my modifications was the Marshall JCM style tonal changes.

cubisteffects gave me a selection of LEDs, capacitors and a a resistor to change my old buzzy distortion box to a smooth and creamy tone machine.

I installed these parts last night, and everything went along smoothly. Everything was a piece of cake to install after going through the first round of modifications.

This morning once everyone was up I was able to turn my HT-5 up to reasonable level to take a listen to my handiwork. I also thought I would have a look at the install job again to make sure everything looked ok.

It was at this point I realised that I had accidentally installed the LEDs around the wrong way, mixing up the polarity.

I went to de-solder the two LEDs so I could put them in the right way round, and once I removed the LEDS completely from the PCB I suddenly realised something was amiss. I had accidentally taken off the tracks around the solder points. I couldn’t actually get any solder to stick to them after I had aligned the LEDS the right way round.

After freaking out a bit I decided I would try some conductive wire glue that I had lying around. Thankfully that seems to have taken OK, and now everything is back together and working fine. 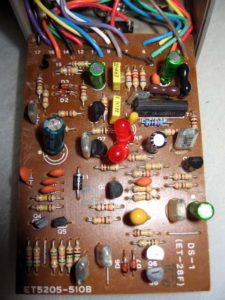 Stage 2 of the cubisteffects mods complete!

I also replaced the red LED indicator light with a new one that glows orange, showing that this little DS-1 is no ordinary stomp box.

So on to the important part, how does it now sound?

I have found that the second stage of modifications have indeed turned the old buzzy noise box in to a smooth creamy distortion machine.

There is not as much gain now, but it is a far more pleasing tone that is generated. It is much more rounded and smooth.

The tone has changed dramatically too. I would have normally set the tone knob between 11 and 12 o’clock prior to the modifications. I am now rolling the knob to 3 or 4 o’clock.

Here are some samples of the same riffs recorded after the first stage of modifications. Again my recording method is a little rough. I’m using the direct out on my HT-5 in to the line in on my PCs sound card. Not the nicest recording pathway, but it gets the point across.

Once again a big thanks goes out to cubisteffects for kindly giving me the parts and help to make these modifications.