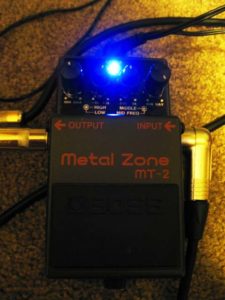 The Boss MT-2 Metal Zone distortion pedal is well known as a high gain, but very sterile sounding pedal. It’s good for bedroom metal, but not much else.

I had a Boss MT-2 Metal Zone distortion pedal sitting around so I thought I might see if I can make the pedal a bit more organic, and full sounding.

I did a search online for any interesting MT-2 mods and stumbled upon a thread on freestompboxes.org on Boss Metalzone MT2 mods.

I decided to try out the “Diezel mod listed in the thread. The modifications are as follows: 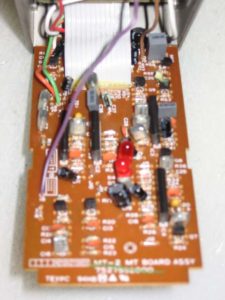 So I made these changes, and found that the tone of the pedal was a little more organic than stock, but the distortion was still a bit too over the top. I decided to replace the 1n4001 diode with another red LED.

This change made a huge difference! There was a drop in the distortion available in the pedal, but what was left was much fatter and chunky. Don’t get me wrong, there is still enough dirt after the mod for big metal sounds, it’s just a lot bigger and thicker.

The pedal is still probably best for scooped metal sounds, as long as you don’t go silly with scooping the mids too much. Setting the mids at about 12 o’clock, and the low and highs between 4 and 5 o’clock, with the mid freq at 1 to 2 o’clock gave a nice modern metal tone without too much scooping going on.

The changes have also resulted in the MT-2 being a really good overdrive as well. I switched over to the dirty channel on my Blackstar HT-5, rolled the Dist knob back to zero, and adjusted the Level knob and found a beautiful, fat tone to accentuate my dirty channel. Best of all it doesn’t sound to blubbery either, it’s fat, but still nice and sharp around the edges.

So now my Boss MT-2 is far better sounding, but it still retains it’s modern scooped metal sound, albeit a far more organic real sounding one. I believe this pedal would sound a lot better as the basis for distorted guitar tones in a band setting than the stock pedal. The added benefit of a fat overdrive to boost an already distorted amp is fantastic too.

I’ll hopefully record some basic samples over the next day or so and upload them.

Since this article was written I’ve made some more progress with my MT-2 mods. Check out my part 2 post for my updated mod list. I believe this is a far better sounding MT-2 modification.