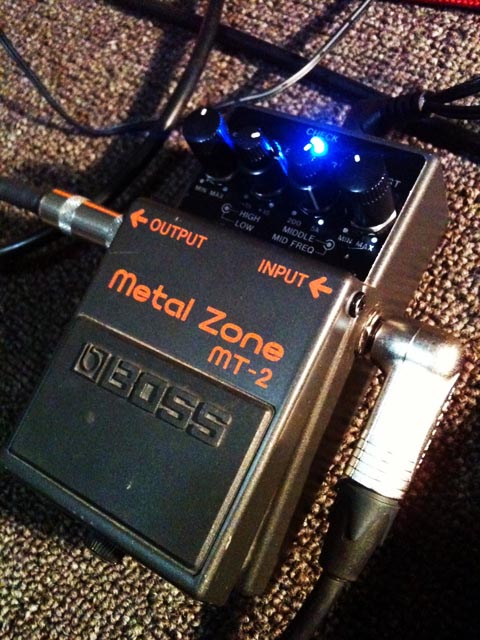 The Boss MT-2 Metal Zone, sounding so much better now.

I decided to revisit the previous mods I had done to my Boss MT-2 as I wasn’t completely happy with the sound as a distortion pedal. It was nice as an overdrive, but I was more interested into making it a great distortion box.

As in my earlier post about modifying the MT-2 I had tried one 1N4001 diode and one red LED, as well as two LEDs. I wasn’t quite happy with that so I decided to install two 1N4004 diodes.

After getting rid of the jumper wires, and placing the capacitor back in C24 I was back to where I should have been with my modifications thus far.

I also decided to change C36 from a 0.1uf MKT capacitor to a 1uf to make it take on the characteristics more reminiscent of a Marshall amplifier.

I tested one LED and diode again and decided that the two LEDs were so much better.

So in the end my modifications are as follows:

With these changes I found the pedal sounded much tighter and clear. I’ve been able to get my modified MT-2 to sound kind of similar to my Blackstar HT-5 dirty channel, which I’m quite happy about.

Update:
Here is a comparison audio file to show what my modified Boss MT-2 sounds like compared to a stock one. Both pedals are dialled up with the same settings.  First is the stock MT-2, second is my modified MT-2, and third is the dirty channel on my Blackstar HT-5. Apologies for the crackly audio, my cable and microphone aren’t the greatest.