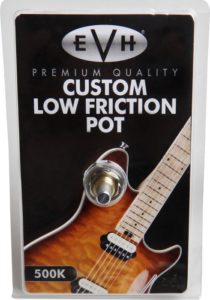 How much EVH mojo can be found in one pot?

There has been a lot of discussion over Eddie Van Halen’s use of his name on a huge range of signature products over the past few years. Some wonder if he’s spending more time trying to sell his name than writing new music for Van Halen. One item of contention in this discussion is the move to release a signature potentiometer, the EVH Custom Low Friction Pot. Many feel that slapping a name on a pot, and selling it for 3 times the cost of a regular pot is taking it a bit too far. I’m not going to go into this debate, besides with the costs of parts in Australia, ordering the EVH pot from the States and having it posted to me didn’t really cost much more money than buying a good quality DiMarzio pot at my local store!

Eddie Van Halen has apparently had a love-hate relationship with his volume pots over the years. As a player who uses the volume pot to control his tone they have never been able to move fast or freely enough for him. Van Halen had Bourns manufacture special low friction potentiometers for his signature EVH guitars, and now they have been made available to be purchased separately.

Let’s start with the bad first. The most annoying part of the EVH pots is that they only come with a solid shaft. This means many of the standard knobs found on most guitars will not fit on the EVH pot. I had a couple of set screw knurled metal knobs that I could squeeze on the pot, but it doesn’t suit the guitar I’ve installed the pot in. I’ll have to find something that better fits the look of the guitar soon. Les Paul players won’t be able to use the EVH pots either as they are only available in standard length shafts. Hopefully at some point long shaft models will become available.

I noticed while installing the pot that the casing for the potentiometer seemed a little thin compared to some brands. Everything else felt heavy duty about it so I wasn’t too concerned as once the pot is installed in the guitar it’s very highly unlikely that any damage could be done to the casing. Everything else is nice and solid, and the EVH pot should last many years.

So what is so special about the EVH Custom Low Friction Pot? Well to put it simply, spinning the pot to lower and raise the volume is far easier. With barely any resistance in the movement of the potentiometer you can flick the volume control with your little finger and spin it from 0 to 10 and vice-versa with great ease. At first a free spinning pot feels very strange, almost like it’s broken, but once you get used to the free spinning nature you might wonder what you did without it.

Despite the fact that my Blackstar HT-5 is a two channel amplifier I typically use it like a single channel amp. I use the dirty channel with a high gain tone, and use my volume knob to control my clean and dirty sounds. Adjusting the volume and distortion with standard volume pots can sometimes be a little frustrating, as you have to  be careful to adjust it just the way you want. With the EVH Low Friction Pot flicking between clean and dirty tones with your little finger is a breeze, and once you get used to the pot you barely have to think about it. Volume swells and other volume based tricks are also much easier with the EVH Low Friction Pot.

Overall the EVH Custom Low Friction pot is a great option for players who use their volume controls a lot. The free spinning nature of the potentiometer makes adjustments so smooth and simple that you’ll wonder what you did without them. The lack of split shaft and long shaft options is a bit annoying, but hopefully they will be an option made available soon.