You are here: Home › DIY › More meddling with the DiMarzio Tone Zone

Some people are probably questioning my reasons for doing so many modifications with pickups. “Why don’t I just buy something that suits you better” I’m sure is something many would say. The reason is that I’m quite often on a strict budget, being a family man with mortgage, kids and all. Tinkering away with things to suit me better saves me the hassle of buying and selling, and is usually quite minimal in cost. Plus it’s also fun to experiment with things, and make something kind of unique.

First up, here is a demo of the stock Tone Zone, taken from the samples I recorded in the capacitor tone tests. The same riffs are played for all subsequent modification demos.
TZ_stock

Here is the resulting tone:
TZ-halfAir

The half-air mod opens up the tone a bit, with a little less compression and output. The boomy low end nature of the Tone Zone is lowered a bit as well.

It is said that a half-aired Tone Zone is essentially what DiMarzio built for the bridge position of the Ernie Ball Music Man Eddie Van Halen signature models. I’d love to get my hands on one of the EBMM pickups to confirm this. Anyone have one they are happy to get rid of? 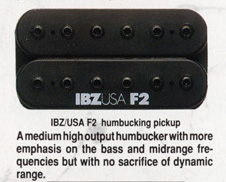 The IBZ/USA F2 has been a popular pickup amongst Ibanez enthusiasts.

DiMarzio have made a number of OEM pickups for Ibanez over the years. One of the most popular is the IBZ/USA F2, which was found in a number of RG series, S series, and Radius, to name a few.

Listening to the IBZ/USA F2, it does have a similar tone when compared to the Tone Zone. It has a fairly compressed high gain tone with a lot of low end and mids. It is a little brighter than the Tone Zone, and not quite as boomy.

I wanted to compare the Tone Zone and IBZ/USA F2 by swapping the magnets, so that the Tone Zone had a ceramic magnet, and the F2 an Alnico 5 magnet. This was brought on by the fact that both pickups are quite popular with Ibanez aficionados. Some find the Tone Zone too thick, and prefer the F2, while others like the organic fatness of the  Tone Zone and find the F2 a bit too brittle.

I thought by swapping out magnets people would be able to save a bit of coin by getting pretty close to the tone of the pickup they prefer.

Here is a demo of the IBZ/USA F2 with an Alnico 5 magnet:
F2_alnicoMagnet

I was quite surprised when I installed the ceramic magnet into the Tone Zone. The ceramic magnet seemed to clean up the tone a little, although it’s probably got a bit more output. There is definitely a bit more clarity in the tone. The interesting thing is that both modified pickups sound remarkably similar

Here is a demo of the Tone Zone with a ceramic magnet:
TZ_ceramicMagnet

So both of the modified pickups are sounding very similar, and I’m quite liking the resulting tone. I currently have the ceramic Tone Zone installed in my Ibanez RG550, and I think I’ll keep in there for a while now. I’ll still probably do some tinkering with it soon. Once you get the DIY bug it’s hard to stop.

9 Responses to "More meddling with the DiMarzio Tone Zone"