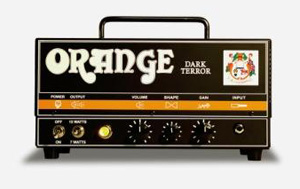 So new gear announcements have started to come out in line with Musikmesse 2011. I’m a big fan of low wattage high gain valve amps, so I was very excited to see Orange Amps release a new product right up my alley. The Dark Terror is a familiar silhouette, with the same shape and range of knobs on the front. The differences are obvious though. The Dark Terror is coated in black, and houses the high gain shape circuit as found in the Thunderverb series of Orange amps.  The valve powered effects loop is a welcome addition to the Dark Terror as well.

Here is what Orange have to say about the Dark Terror:

Dark forces have been stirring at Orange Amps where mysterious alchemy has created the beast to be unleashed. Striding out of the shadows is the new Dark Terror, guitars amps will never be the same again!

Menacingly small, easily recognisable, this aggressive little amp comes with a mind blowing sound which combines the shape control of the Thunder series with the weight and size of the monster Terror family. This Frankenstein like amp has creepy amounts of gain on tap with disturbingly pleasurable responsiveness. It is uncompromisingly brutal, doubtless unhinged, even ferocious!

The Dark Terror rises from the ethereal depths to fulfill the every desire of the Heavy Metal and Rock guitar players. With its characteristic fearless Orange Amp looks, heavy duty construction and portability, guitar players everywhere will quickly become attuned to this scary dark force of nature.

The Dark Terror is highest gain Terror amp ever and comes with:-

The Dark Terror is available from the end on May 2011 and priced at £399 (inc. VAT). Hear its distinctive Orange Amp sound and you will feel this mysteriously attractive force pulling you into the shadow of the Dark Terror. It’s everything you want from a Black Orange Amp. Prepare to ride the Dark Terror storm.

This looks like a seriously awesome amp. The combination of the Tiny Terror footprint and output with the awesome high gain tone of the Thunderverb series is sure to be a winner. I’ll be keeping an eye out for this in my local store.