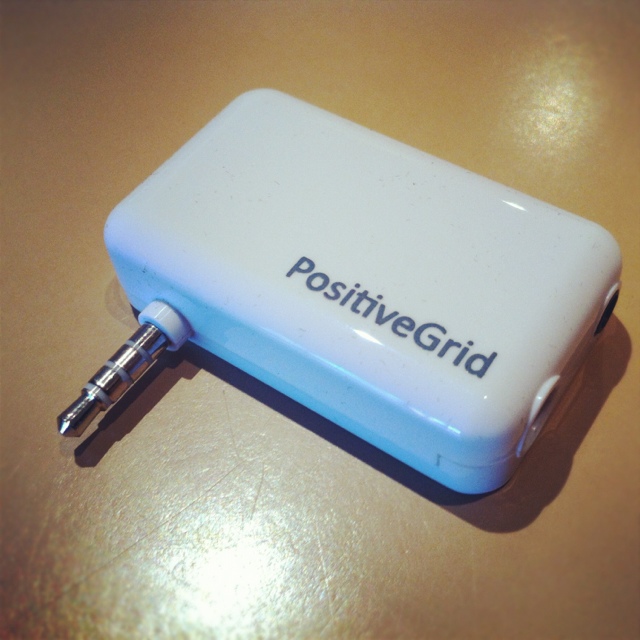 The JamUp Plug is a great little iOS interface at a great price.

Nowadays there are a range of instrument interfaces available for the iPhone, iPad and iPod Touch. With so many available, and a wide range of prices and connectivity it can be hard to work out which one is best for you. Most connect through the headphone jack of your iOS device, and they all provide an audio connection for your guitar or bass with varying degrees of success.

One of the latest players in the iOS instrument interface is Positive Grid, with their JamUp Plug. Like many of the other interface manufacturers Positive Grid have their own iOS app to use with the JamUp Plug – JamUp Lite and JamUp Pro. I’ll be reviewing JamUp Pro soon.

The JamUp Plug is one of the most keenly priced of all the iOS instrument interfaces. At 19.99USD. At around $10 less than the next batch of comparable rival products it looks to already have an edge over the competition, but if the JamUp Plug doesn’t provide a decent enough audio quality its value price doesn’t really matter.

As soon as I received the JamUp Plug there was one thing I really liked about it – the packaging. So many electronic devices come in the standard clear plastic packages with a bit of thin cardboard between it with the labelling and instructions, etc. The JamUp Plug comes in a nice box-like package, with some great imaging for the plug and application on the cardboard, and the plug nestled nicely in some firm foam. This looks a lot more up-market than the standard blister pack plastic.

The JamUp Plug is a little white plastic box that’s a little thicker than an iPhone, and almostwide as the shortest edges of the phone. What’s nice about the JamUp Plug is that unlike a lot of the other interfaces on the market it has the jack built into the interface box rather than on a short cord. This means that the JamUp Plug isn’t hanging on by a lead, and it also works well to prop up an iPhone, working kind of like a kick stand on a bike. I don’t think it was done for this express purpose, but it is handy.The ¼” instrument input, and 1/8” headphone/audio output share one side of the interface, and are easy to access. The only potential issue with the build of the JamUp Plug is that the plastic casing feels a little less robust than some may like, but unless you step on it the JamUp Plug should hold up fine. At the end of the day most probably aren’t going to be using their iOS device on stage as a guitar amp/pedals, etc so it doesn’t really need to be strong enough to hold up to the rigours of playing on stage.

What people are going to be most concerned about when picking an instrument interface is the sound quality. Fortunately the JamUp Plug provides great quality audio considering its price.

Some instrument interfaces on the market have a bit of trouble with feedback when using guitars loaded with active pickups, but the JamUp Plug wasn’t one of them. It was happy with either passive or active options.

Audio through the JamUp Plug was nice and clear, providing a great signal through the apps I tested it through. I did notice an occasional momentary buzzing noise, but nothing major. It may have been caused by interference by some other nearby electrical equipment. It’s not  really an issue as it’s barely noticeable when playing, and considering the price, a small trade-off.

Overall the JamUp Plug is a great bang for buck iOS instrument interface. It provides a great clear signal regardless of pickup type, and the minor buzzing noise issues are not really much to worry about when you consider how much the JamUp Plug is compared to the competition. This will make a great stocking stuffer for any iOS device toting guitar player this Christmas.