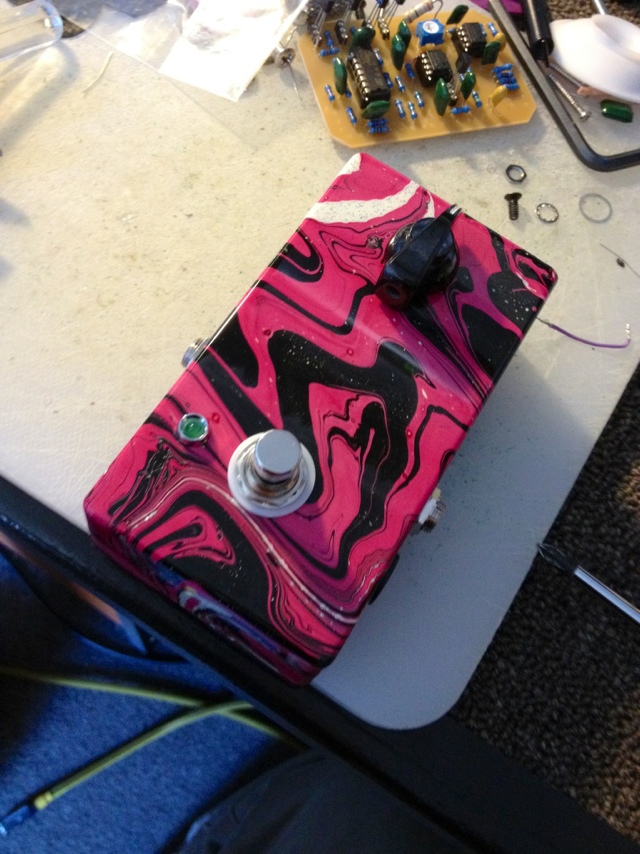 Jemsite is one of my favourite forums to hang out on. There are a great number of fantastic members, all fans of Ibanez guitars. Late last year, one member posted about a whole bunch of pedal enclosures that he had swirled (like some of the classic Jem models). I thought they looked really cool, but didn’t have the money to buy any. One other member was generous enough to buy two enclosures, one for me to build him something, and the other as payment to me for building him a pedal.

As I was waiting for the enclosures to arrive we discussed what sort of effect he would want. He decided on a phaser of some sort, which I was a bit nervous about building. I had only build boosts and distortion/fuzz effects at that point, and was worried about whether or not I would be able to successfully build something like a phaser. 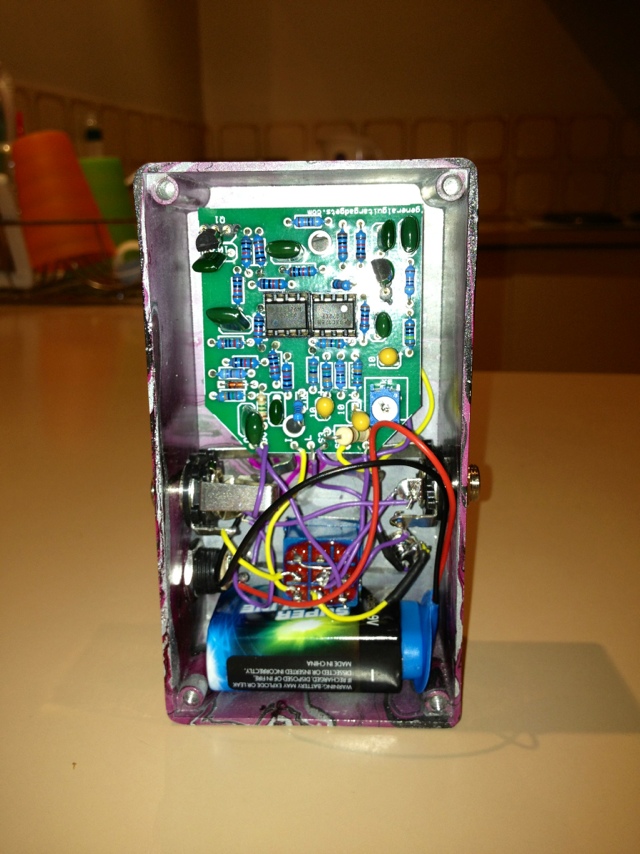 General Guitar Gadgets Phase 45 clone PCB was nice and easy to work with.

I ended up deciding on building an MXR Phase 45 clone, seeing as it was probably one of the most basic phasers to build. I ordered the PCB from General Guitar Gadgets, and started on purchasing the parts needed to build the pedal.

Once everything arrived I got onto populating the PCB in my spare time. The General Guitar Gadgets PCB was very easy to work with, and soldering components to it were nice and simple and quick.

For the first time with a pedal build I decided to plan the layout in the pedal first, before doing any wiring, so I could use the shortest wire runs possible. I wanted to do this to ensure that I minimised the noise coming into the circuit.  Drilling the enclosure was a bit nerve-racking since I wasn’t sure how well the paint would hold up to being drilled. I used masking tape across the areas to try and avoid any paint damage, and to also plot where I would drill. While drilling the holes for the stomp switch and one of the jacks I did pull some of the paint off, down to the primer. Thankfully the stomp switch washer completely covered the damage there, and the damage by the jack is barely noticeable behind the jack’s washer. 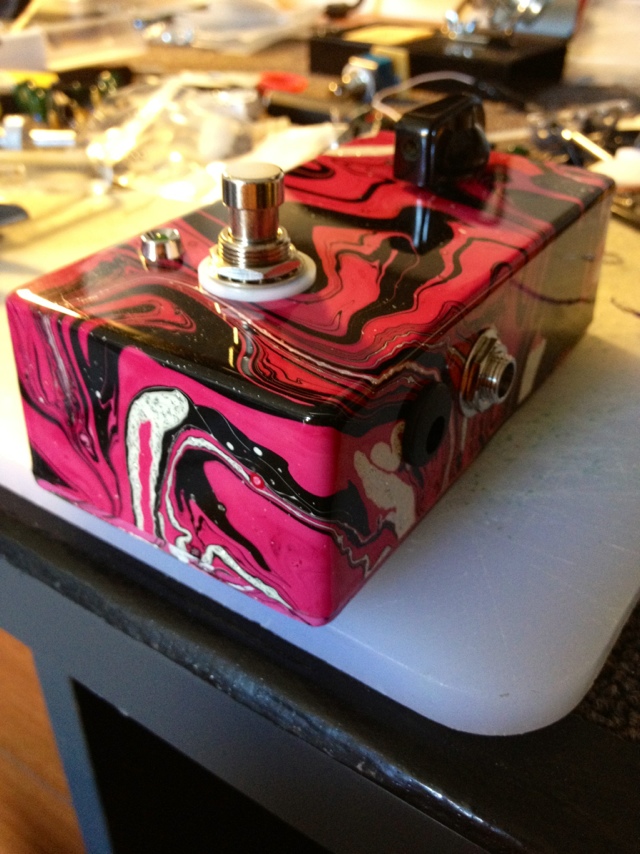 I got everything installed nicely with a perfect fit for all off-board components. the PCB fit nicely on top of the potentiometer, with no components  protruding from the enclosure. Wiring everything up was a bit more taxing, since I initially wired the input and output jacks around the wrong way, and wondered why the circuit wouldn’t work! After reversing my guitar leads I found that the pedal worked and sounded great, and got onto re-wiring everything again. Unfortunately I had to re-do a number of the wires since the ones I had initially done were too short for their new locations. No biggie though, and now everything is wired back up, and again sounding fantastic.

One of the challenges with many phasers is that they require matched FETS. These transistors need to have as close a matching resistive range, and FETs are notorious for widely inconsistent readings. I bought a pack of 25 with the hope that once I had had the packet I’d be able to build a FET testing circuit, and find a pair that matched nicely. I was very, because in the end I installed a random pair, and the pedal sounded fantastic! I confirmed this by testing a pair I knew were matched from a set I received with another phaser circuit I’m currently building. I’ll get around to building a FET tester soon, but it’s not required at this moment. 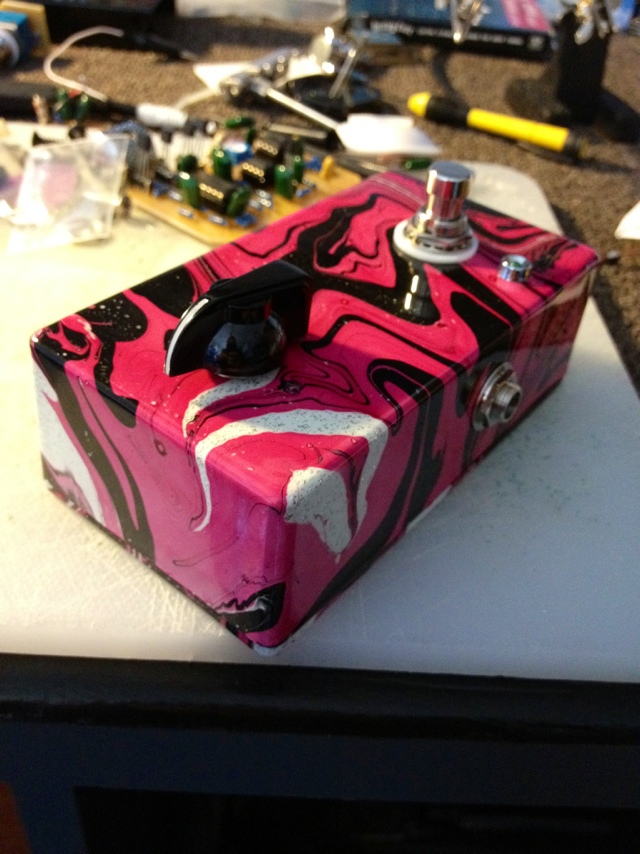 I tested the circuit both in front of the amp, and in my effects loop. It sounds fantastic in both positions. The Phase 45 added a nice subtle texture, especially with clean rhythm parts in front of the amp. I never takes over the guitar and amp’s tone, only compliments. In the loop the effect is a bit more pronounced, great for distorted guitar parts. It’s not as in your face and over the top as a Phase 90, but still quite prominent.

Overall I’m really happy with how this pedal looks and sounds. I hope when it makes it’s way to Norway to it’s new owner he will like it as much as I do, and I hope that it’ll give him many years of use. Now I think I may need to build myself another one since I loved this so much!