“In the world before the Super Distortion primal chaos reigned. Heaven sought order, but the Phoenix can fly only when its feathers are grown. The four worlds formed again and yet again, as endless aeons wheeled and passed. Time and the pure essences of Heaven, the moistures of the Earth, and the powers of the Sun and the Moon all worked upon a certain rock – old as Creation, And it became magically fertile. That first egg was named Thought. Tathagata Buddha, the Father Buddha, Said ‘With our thoughts we make the world’. Elemental forces caused the egg to hatch, from it then came the Super Distortion. The nature of the Super Distortion was irrepressible!”
– paraphrased introduction the the TV series Monkey 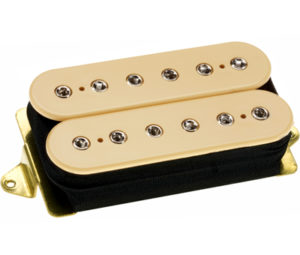 The Super Distortion, the pickup that started it all.

OK, maybe it wasn’t quite like this, but before Larry DiMarzio created the Super Distortion there was no after-market pickup industry. You typically bought a guitar, and just lived with the pickups it came with. But in 1972 the world changed. The Super Distortion was nothing like the traditional pickups found in most guitars. With a much higher output and a ceramic magnet, the Super Distortion was able to push the amplifiers of the time much harder, giving a player more sustain, and of course distortion. It became very popular with guitar players all over the world, and a new industry was born.

OK, enough of the history lesson and cheesy paraphrased quotes.

I tested the Super Distortion in my Ibanez 20th Anniversary RG550. It has a basswood body, and maple neck and fretboard, floating  double locking Edge bridge, and the accompanying pickups are a DiMarzio made IBZ/USA single coil, much like a DiMarzio HS-2, and DiMarzio PAF Pro.

The ceramic magnet helps give the Super Distortion an immediate attack, and the boosted lows and mids means that you are greeted with a glorious wall of sound. It is a harmonically rich pickup, and lends itself well to rhythm and lead playing. Your notes will never get shrill or harsh as you play further up the fretboard.

In the seventies there weren’t really any two or three channel amplifiers around, so guitar players who preferred dirtier tones relied on the volume knob on the guitar for cleaner tones. The Super Distortion does a great job of cleaning up when the volume knob is rolled back. The pickup also responds quite well to picking dynamics. You can get a softer cleaner tone just by picking softer or using your fingers.

The huge roaring wall of sound isn’t the only thing that the Super Distortion can do. Split it with the single coil in the middle and you’ll find some very nice strat-like tones and output. This setting could easily do some funk and country styles Add a little chorus and analogue delay and you’ve got those classic eighties clean tones.

Overall the DiMarzio Super Distortion is a classic pickup that is designed strictly to rock. It’s big fat organic tone can be heard all over so many albums from the last four decades, and if you like to play rock of any description it’s well worth having a guitar loaded with one somewhere in your arsenal.