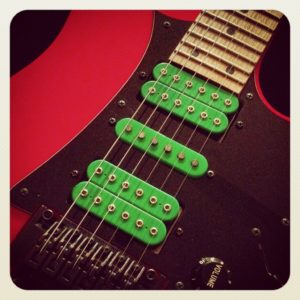 I loaded the Gravity Storm Bridge into my Ibanez RG550 20th Anniversary, with a basswood body, maple neck and fretboard, and original Edge bridge loaded with a Floyd Upgrades brass sustain block.

Plugged in to my Blackstar HT-5 and dialed in on the dirty channel, the Gravity Storm is big, fat and juicy sounding. The treble frequencies are much more rounded off when compared to the Evolution. I found that the Gravity Storm reminded me quite a bit of the Super Distortion, albeit with a more modern sound, and clarity. Big rock chords sound phenomenal, with heaps of chunk and grind. Single note work just sings, and is perfect for long sustained notes with heaps of vibrato.

The Gravity Storm works just as well for fast runs, and the big fat bass and mid-range frequencies ensure that notes higher up the fretboard never get too piercing. Harmonics pop out and scream, just as you would hope from a signature Vai pickup, although they probably take a little more work to achieve compared to the Evolution bridge. You can clean up the tone by rolling the guitar’s volume back and picking softly, but the Gravity Storm still has a little dirt when you do so.

On the clean channel the Gravity Storm feels quite a bit like a Super Distortion on a clean setting. It’s big and brash when the strings are hit hard, and it sweetens up with a softer touch. The Gravity Storm is nice and warm and friendly, with a soft attack when you are gentle. The harder hits beef up the attack, and the tone cuts through a lot more.

Split with my DiMarzio-made IBZ/USA single in the middle, the Gravity Storm is capable of getting some pretty nice stratty tones, with lots of twang and bite.

Overall the DiMarzio Gravity Storm bridge is a great humbucker that is definitely not just for Vai wanna-bes. It’s big and bold like a Super Distortion, which is fantastic for any rock guitar really. There is enough articulation for complex lead guitar work, and the Gravity Storm is fat enough that notes high up the fretboard will never get piercing. If you are after big fat and juicy guitar tones, whether it be for rhythm guitar work, super fast shredding, or anything in-between, the Gravity Storm bridge is definitely worth a look.