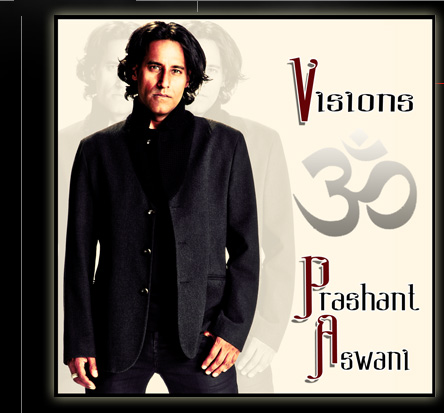 I’m always a bit wary of instrumental guitar albums. I quite often find them either a bit too self-indulgent, or constantly too quirky for my liking. Sure, I like a bit of shred or some crazy sounds, but it’s a turn-off when it comes at the expense of melody and harmony. Constant shred with hyper fast licks, swept arpeggios and tapping just starts to sound like an exercise, and continuous crazy quirky noises  just gets tiring after a few minutes.

In steps Prashant Aswani, an acclaimed jazz/fusion virtuoso and session and touring guitar player from California. I was sent his latest album “Visions” to review, and I can tell you, whilst I hadn’t really heard any of his music prior to this album I definitely want to hear more of it afterwards.

“Visions” contains some beautifully crafted songs with mesmerizing guitar performances. His smooth lead tone does a great job of singing wordless vocal lines, and crazy lead licks alike. I’ve mostly been listening to it while driving, and have found it to be a great driving album. The music ebbs and flows in such a way that makes it a fantastic soundtrack for hitting the road.

Aswani’s command over the guitar is very apparent all across this album. He understands when a simple melodic line is the best way to convey emotions just as much as when some hyper licks are required. There is a fantastic mix of musical styles across the album, and despite the range from ballads to heavy rock, it sounds very cohesive as an album.

If you are someone who appreciates instrumental guitar music where the artist has the ability to subtly impress you with their technical ability, and blow you away with their song writing ability then definitely check out “Visions”. You’ll be glad you did.