Guitar players all over the world were astounded by the tones capable of being made on their iPhones when Positive Grid released JamUp XT and JamUp Pro to the iOS market back in 2011. Since then the JamUp product has grown from strength to strength, with numerous updates, features added, cloud sharing and numerous signature amps and effects created in conjunction with the likes of Misha Mansoor, Jeff Loomis, Keith Merrow, Ola Englund and many more. So how can so much success be topped? The answer for Positive Grid was to provide users with a way of creating their own custom amplifiers.

BIAS is an amplifier designer and modeller.  When it was first released for iPad it blew people away with what could be done. This wasn’t just some modeller that allowed a user to play with amp settings. BIAS allows players complete control over an amplifier and all of the associated peripherals that were used to record a guitar amplifier. Users can change things like the preamp and power tube types, the ability to bias them to taste, swap out a range of transformer types, edit tone-stacks,  preamp and power amp voicing, choose from a range of speaker cabinets and speakers, place microphones for recording, even change the visual aesthetics of the amplifier itself.

When I started reading about, and hearing the results of BIAS I was very excited about what it could do, but was disappointed that it was only available on iPad. When I saw more of BIAS online I could kind of understand why BIAS wasn’t released on the iPhone and iPod Touch, the amount of control provided on each area of an amp looked like it would be too overwhelming for smaller screens. Regardless there was an outcry for an iPhone version of BIAS, and Positive Grid delivered BIAS for iPhone earlier this year. Positive Grid were nice enough to provide me with a download code so I could review it, and I was happy to oblige. 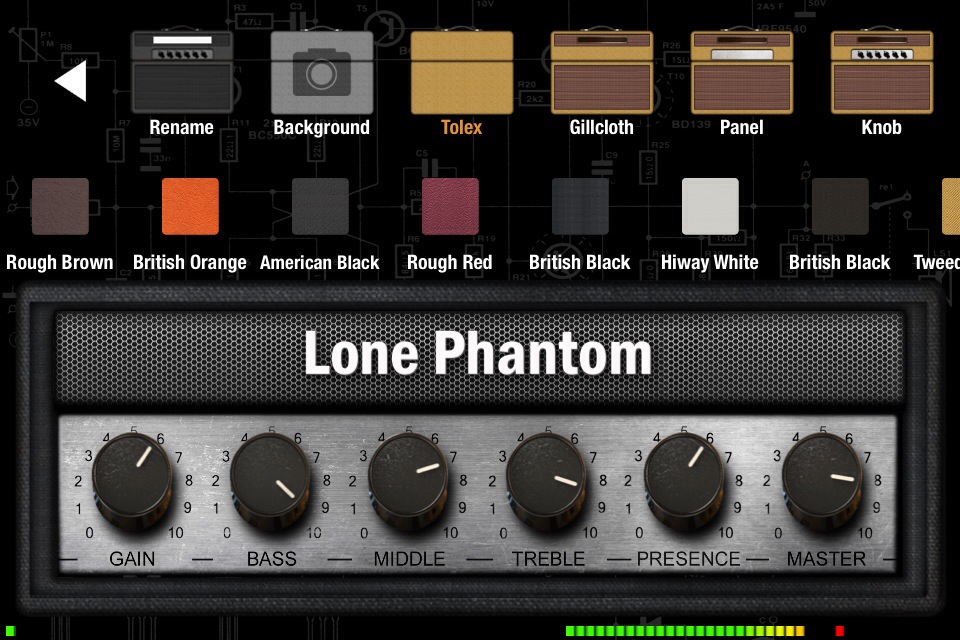 On opening up BIAS and loading up an amp I was extremely impressed with the basic look of the screens. The initial amp screen looks familiar to JamUp users with the added ability to change the look of the amp, from the name to background, tolex, grillcloth, panel and knobs. The user can dial in the amp in the standard sense from here too. This is all well and good, but it’s underneath all of this where BIAS really become fun. 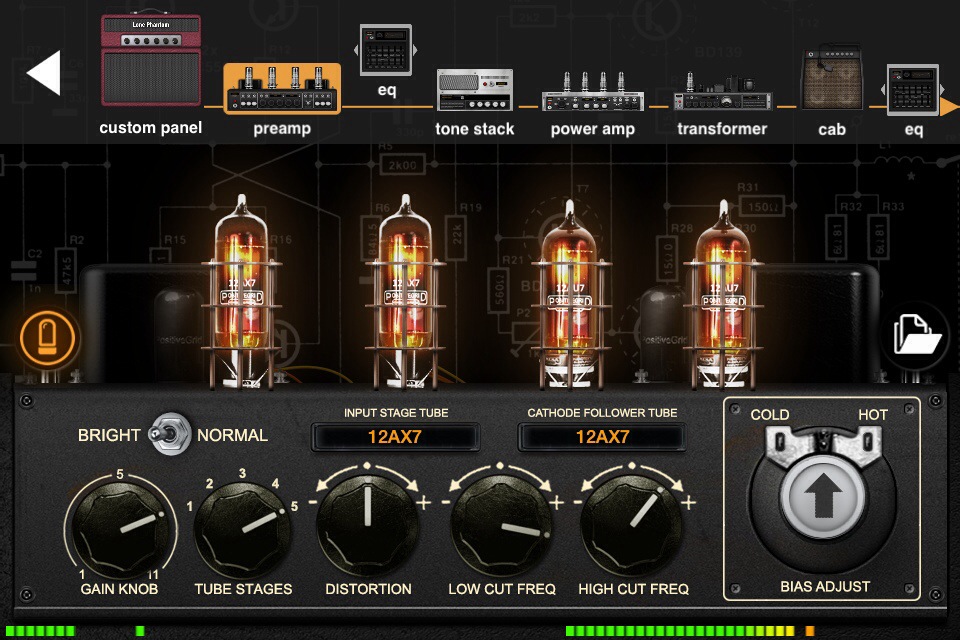 Moving onto the preamp screen we start to see how powerful BIAS truly is. You can select the input stage and cathode follower tubes, and then take it further by adjusting the bias on the tubes, tuning in the preamp gain, tube stages, distortion and low and high cut frequencies. 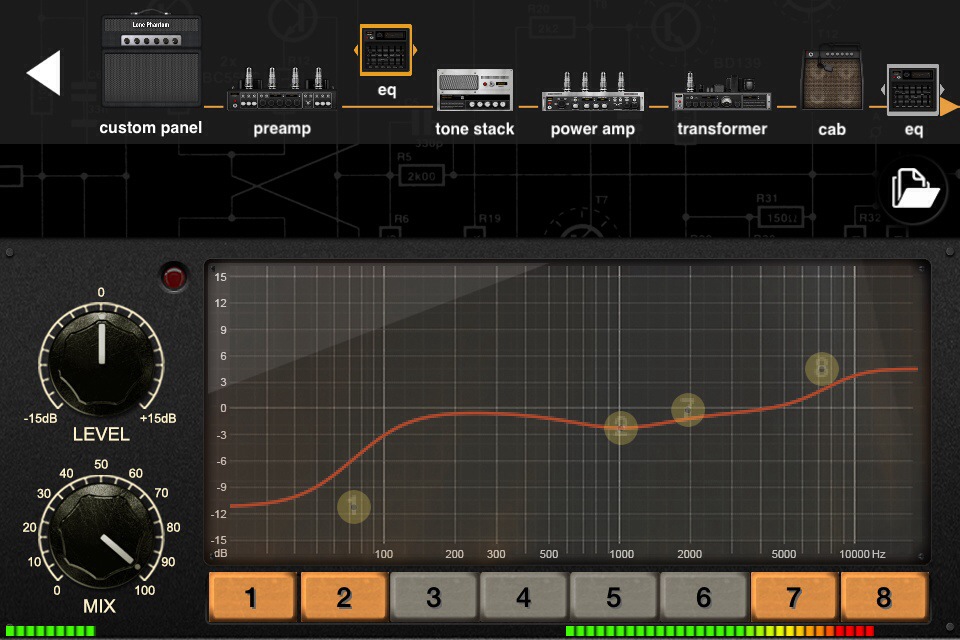 Playing with the EQ sections really have a profound effect on the sound of the amp. It’s possible to really fine-tune the tone in the same way you might in a full-fledged digital audio recording application. 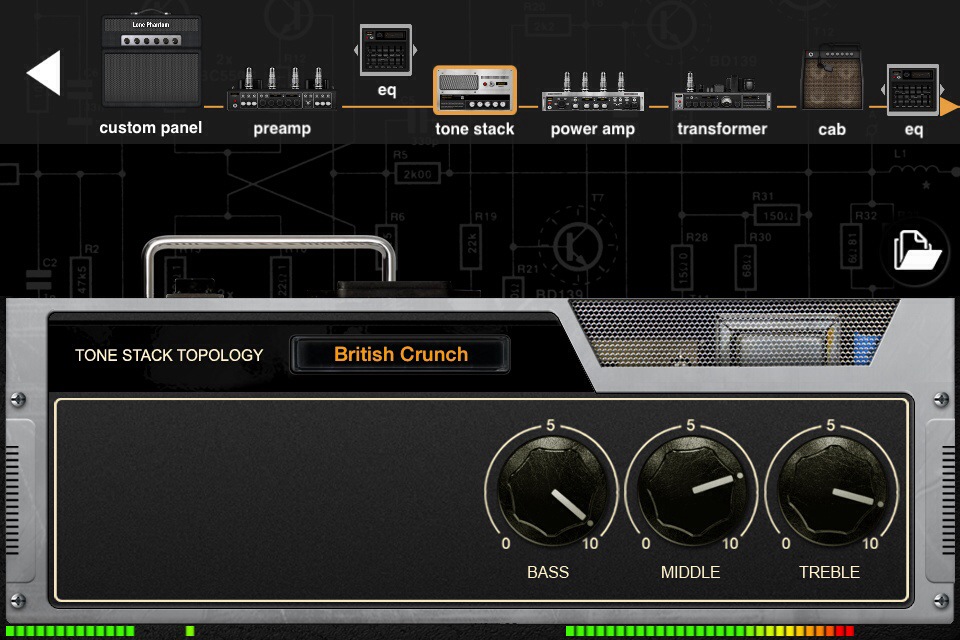 If the EQ is a little overwhelming then the tone stack topology will make plenty of difference, and be a lot easier to get a feel for. There are also a selection of presets to really help you shape your tone. 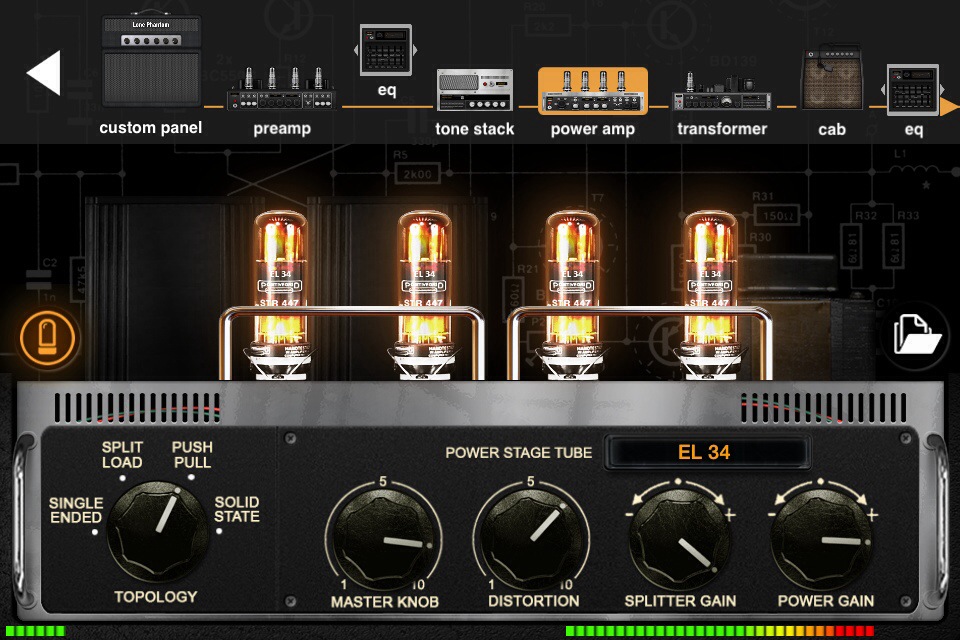 The power amp section, like the preamp section is a lot of fun. Switching power tubes, changing topologies, and really pushing or restraining the master knob, distortion, splitter and power gain controls really give you massive control, and a great understanding of how real life amplifiers work. 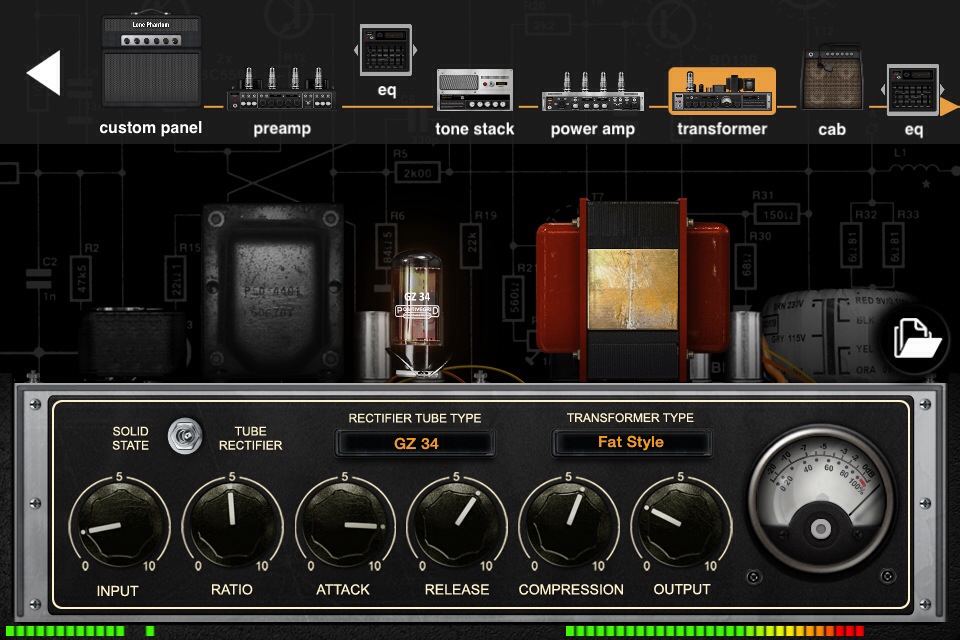 Playing around with the transformer section show’s you how big a part different transformers play on the tone of an amplifier. Switching between solid state and tube rectifiers gives an instant impression of the differences between the two. The different tube rectifier types definitely add that extra sag, and the solid state’s attack is much more immediate. The controls in this section are fantastic for adjusting the compression of the amplifier in a very specific manner. 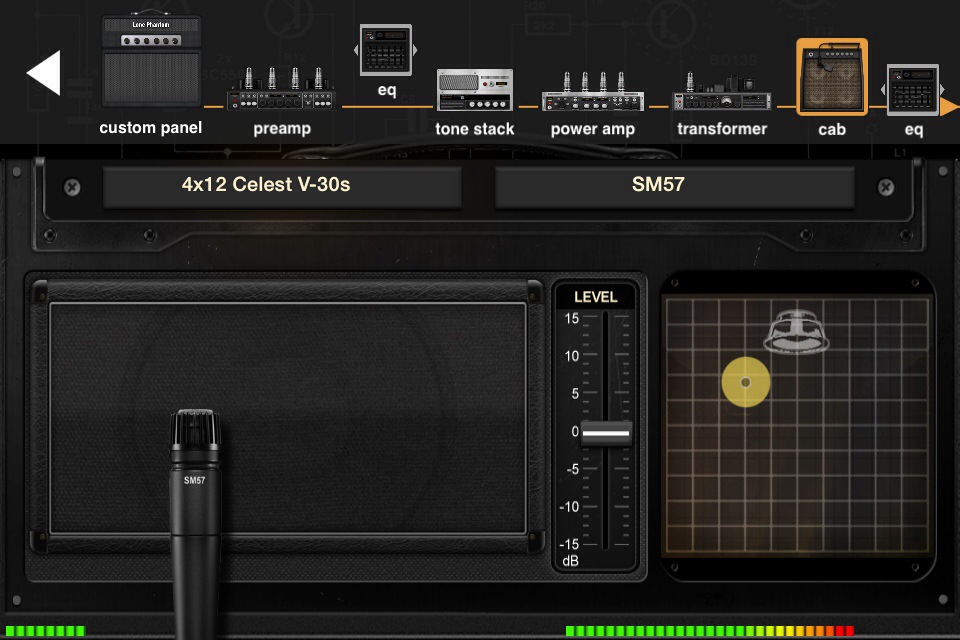 The cab section offers the ability to switch between various popular cabinet types, microphone types and microphone placements. Anyone who has played around with recording will notice how close to the real thing moving the microphone around affects the overall sound. You can also adjust the microphone level, just like you would in your digital audio workstation. 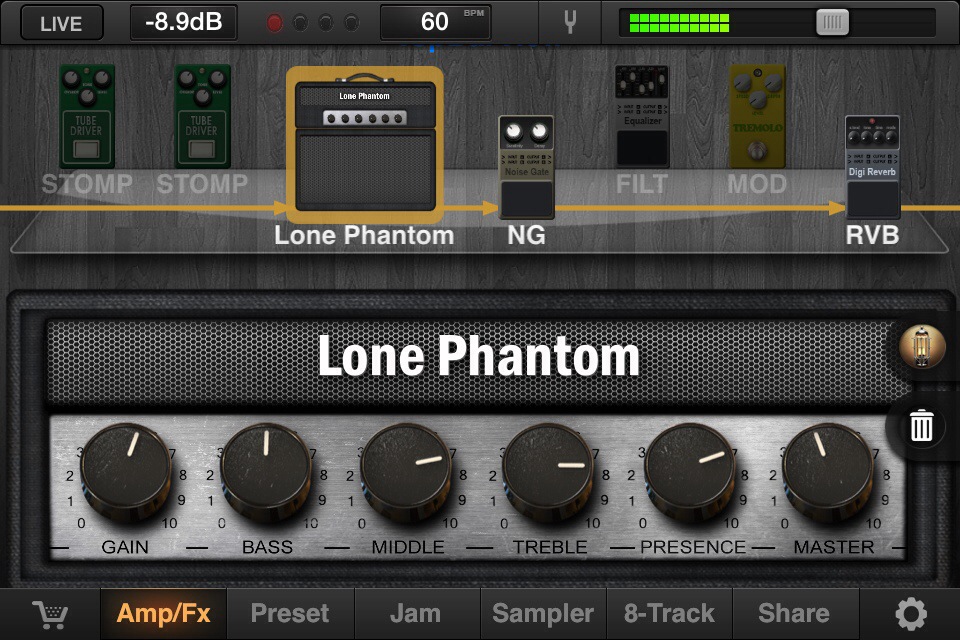 Once you’ve created your own custom amplifier you can play it through the BIAS app, or take it to the next level and open it up in JamUp. Here you are able to set up all your effects pedals, and really have fun with the amplifier, jamming with backing tracks, and recording music. This inter-connectivity is what makes BIAS such a powerful application. 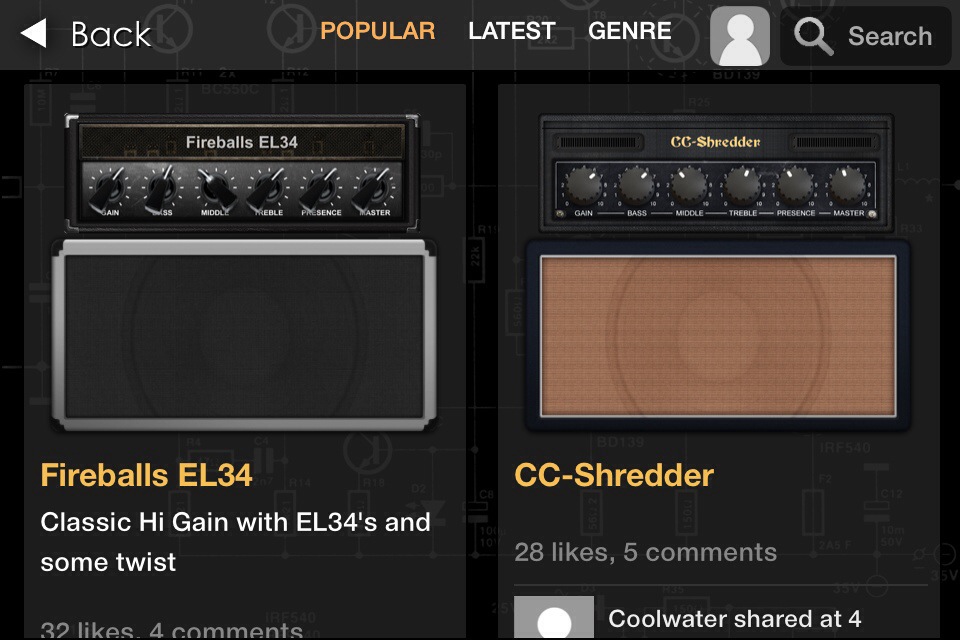 Not only can you create cool customised amplifiers in BIAS, but you can share them with other users too. Tonecloud is a BIAS community where users can upload and share their creations with the entire community. If you have an idea of what sort of sound you want from an amplifier, but not sure how to start creating it ToneCloud gives you a range of amplifiers that can be your starting point to tonal nirvana. Or if you are just after some cool sounding amplifiers you can just download and play away.

The flexibility, control and tones out of BIAS for iPhone are certainly impressive, but what is most impressive is that Positive Grid managed to cram all of this power into such a small package. It would have been understandable if the iPhone version was lacking some of the control and flexibility of the iPad version, but not only have Positive Grid managed to retain all of the functionality, they’ve ensured that it’s easy to use within the limited confines of the iPhone and iPod Touch screen sizes.

Overall BIAS for iPhone is an amazing piece of software. The immense customising power provided by BIAS will enable users to create the exact sound in their head. The sheer simplicity of editing and adjusting properties make it so easy to create an awesome sounding amplifier, and the ability for BIAS to integrate seamlessly with JamUp makes recording awesome guitar tones simple for anyone to do anywhere they have a guitar.