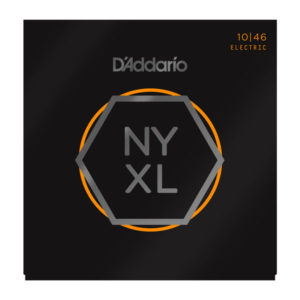 In the last several years there has been a great deal of new developments in the guitar string world. New construction methods, metal alloys and coatings have made guitar players very spoiled for choice. D’Addario have come to the party with their new NYXL strings.

D’Addario went back to the drawing board with the NYXL strings, creating a new break-resistant, high-carbon steel core and plain steel alloy. D’Addario claims that the new alloy’s strength increases the NYXL’s tuning stability, utilising a completely re-invented wire drawing process and a new “fusion-twist” for the plain steel strings. The reformulated nickel plating for the string windings provide greater magnetic properties, which help increase output and greater mid-range response. Currently available in 9-42 and 10-46 gauges, D’Addario are covering many players needs, but more gauges will be released soon.

I received a set of the NYXLs in a 10-46 gauge to try out, and strung them up on my custom Strat, featuring an MIM Fender Alder body, Warmoth 1 piece maple neck with 10-16″compound radius and stainless steel frets, Hantug custom titanium/brass 6 hole bridge and locking staggered Gotoh tuners.

One important thing for me when putting new strings on is that they need to stretch and settle fast. I don’t have time to sit around for ages stretching and re-tuning strings. The NYXLs passed this test with flying colours, only needing the smallest amount of time to stretch and settle before they were pretty much holding tune.

Tone wise the NYXLs are nicely balanced, and are neither too bright or too warm. They are definitely louder than many other strings, both acoustically and amplified. Harmonics pop out of the guitar with ease, both acoustically, and plugged in to a clean or dirty channel. Sustain is one area that the NYXLs have excelled in, yielding great results from both chord work and vibrato on lead playing.

Probably the most important thing for me is string durability. I am particularly good at punishing guitar strings, and usually end up with at least one string breaking after a handful of rehearsals and shows with my band. I typically try to restring a guitar before playing a show as I know that the strings just aren’t going to last as long as I’d like. I’ve had the NYXLs on for over a month now, and they have been particularly impressive in this area of testing. Not only have the strings lasted this long, they have pretty much retained the tone and tension they had when first installed.

Overall the D’Addario NYXL guitar strings are an impressive newcomer to the guitar string market. The NYXLs are a super strong string that will last, while retaining tone and tuning stability. And let’s face it, that what pretty much all guitar players would be looking for, would they not? The NYXLs cost a bit more than many of the established nickel-steel strings, but the durability and tuning stability will probably make them a worthwhile purchase for many guitar players. If you are tired of strings breaking, or even just losing their tone, and typically use 9-42 or 10-46 gauge strings then definitely give the D’Addario NYXL strings a go.