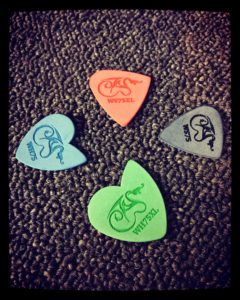 A while back I reviewed the Dragon’s Heart Hardened Guitar Pick. With an interesting and innovative design, I really enjoyed it’s tonal flexibility, thanks to it’s three different picking points, as well as it’s durability. They aren’t the cheapest guitar picks, and a number of players called for a thinner design, and with this in mind, Dragon’s Heart released a new series of picks, the Wyvern series.

The Wyvern series come in two different shapes, with four variants in total. The Wyvern’s Heart are styled like the original Dragon’s Heart picks, and the Wyvern’s Scale, which are a little more conventional looking in shape. Each come in standard and XL sizes, all are 0.75mm thickness. Unlike the orignals, the Wyvern series use a more standard plastic material, helping bring the costs down.

I tested the Wyvern series with my white custom Stratocaster, strung up with Ernie Ball Cobalt 9-42 Slinkies, and compared the picks against my staple Black Jazz III XLs, and the yellow 0.73,, Dunlop Tortex picks.

The first, maybe most noticeable thing when using either of the sharper tips is how snappy the tone is with the Wyvern picks. There is an excellent attack that makes each note stand out. The Wyvern is only 0.02mm thicker than the Tortex, but the material used feels more solid, with less flex when playing, and a similar feel to the black Jazz III XL, despite the difference in thickness. Strumming with the Wyevrn’s rounded edge provides a more mellow tone, but not quite as much as you would initially expect.

Grip is fantastic with the Wyvern picks. The combination of etched logo, and the almost powdery feeling surface ensures that there is no slippage what so ever. Each size is comfortable in the hand, but each player will have their own individual preference. I preferred the Wyvern’s Scale size due to it’s similarities to my staple Black Jazz III XL.

The Wyvern picks are quite durable when it comes to standard strumming and picking, and should last most players a good amount of time. My playing involves a lot of pick sliding or scratching, which is a fairly punishing technique on guitar picks. The pick scrape test has similar results to the yellow Tortex picks. The material starts to ship away pretty easily, leaving a rough edge that makes for slightly hampered picking. It’s not really different to most picks, but it’s something to be aware of. The Black Jazz III XLs are a little more robust in that department.

Overall the Wyvern series picks are a nice addition the Dragon’s Heart range. Their attack, tone and flexibility with the multiple point options makes them an excellent tool for guitar players. Their low price-point make it a very viable option for any player, and definitely worth checking out.