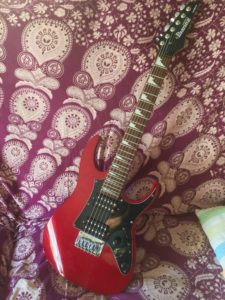 Short scale guitars are an interesting area of the electric guitar market. Mostly aimed at younger beginners, and maybe more seasoned players looking for a smaller guitar to travel with, they are typically built to a strict budget. The strict budget doesn’t usually lend towards a quality guitar build. There traditionally hasn’t been a great deal of options in the short scale market either, so it’s always been a crap shoot getting a decent quality, bang for buck guitar.

Ibanez entered the short scale market with the GRG21 Mikro in the mid-2000s. Offering a short scale guitar with their now legendary RG series silhouette, Ibanez provided players with a more modern looking electric guitar, compared to a lot of the competition at the time. The series was so successful that it has spawned a range of Mikro models, including a couple of signature ones. Other manufacturers have since followed suit with similar offerings to the Mikro series.

I figured I should look at getting a short scale guitar when my eldest started showing an interest in my guitars. A GRGM21CA Mikro came up for a good price, so I picked it up for him. He’s had momentary interest in playing over the last few years, but it’s mostly sat in the corner gathering dust. He’s shown a bit more interest in playing over the last few months, and has a bit more of the maturity required to try and beat the frustration that can loom over the beginner, so we’ve been working on some basic lessons. Now that it’s out and being used I figured I should finally do a proper review of the guitar, 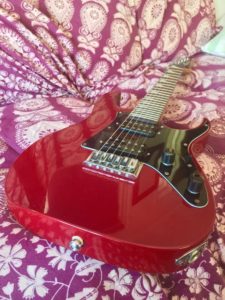 The GRGM21 Mikro features a nato RG-styled body with a hardtail strat-style bridge, two STD humbucker pickups, with a three-way pickup selector, and volume and tone controls. The neck is a 22.2″ scale maple neck with rosewood fretboard, 24 medium frets, and trapezoid tuners.

Picking up the GRGM21, it’s obvious that you’re playing a scaled down guitar. The body is a smaller version of the now classic RG shape, providing a sense of familiarity to a seasoned Ibanez player. The candy apple red paint job is quite striking, and it contrasts nicely with the black three ply pickguard. Looks don’t make for a great playing guitar though, it’s always about the neck, frets and general setup.

The good news is that the neck feels good in the hands, and the fretwork is acceptable for the budget, with no sharp fret ends protruding from the fretboard. The width at the nut is narrow, but not too narrow for larger, adult hands. Good action can be dialed in with a basic setup, and the bridge is as comfortable as any hardtail strat bridge.

I set the GRGM21 up in E Standard with a set of Ernie Ball 10-46 Slinkies, and found that whilst the strings feel a little looser than your standard 9-42 set of strings tuned to E standard on a 25.5″ Ibanez RG, they played well. It takes a little to get used to the easier string bends, but even with the average feeling stock trapezoid tuners, the guitar was capable of maintaining decent relative tune.

Acoustically the GRGM21 sounds pretty decent. Nato is a bit of a questionable “tonewood”, only really found in low end guitars, but the combo of hardtail bridge, body and maple neck and rosewood fretboard provide a lively acoustic sound with decent sustain. 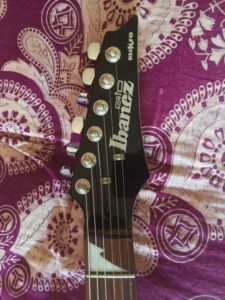 Plugging in is when you really start to notice the cost-cutting that comes with a budget guitar. The STD humbuckers generate a muddy mess of a sound that isn’t really appealing. They’ll work for a beginner learning to play through a basic little practice amp, but a seasoned player will want to upgrade them if they want to spend a decent amount of time playing plugged in. The good news is that the pickup selector, volume and tone pots feel solid enough to keep in the guitar when upgrading pickups.

Overall the Ibanez GRGM21 Mikro is a solid little guitar that will suit younger players starting their journey with the electric guitar, or people looking for a dependable small guitar to travel with. With a few basic upgrades the GRGM21 will serve as a brilliant little pocket rocket guitar that will well and truly punch above its weight range. If you’re looking for a short-scale electric guitar then definitely check out the Ibanez GRGM21 Mikro.