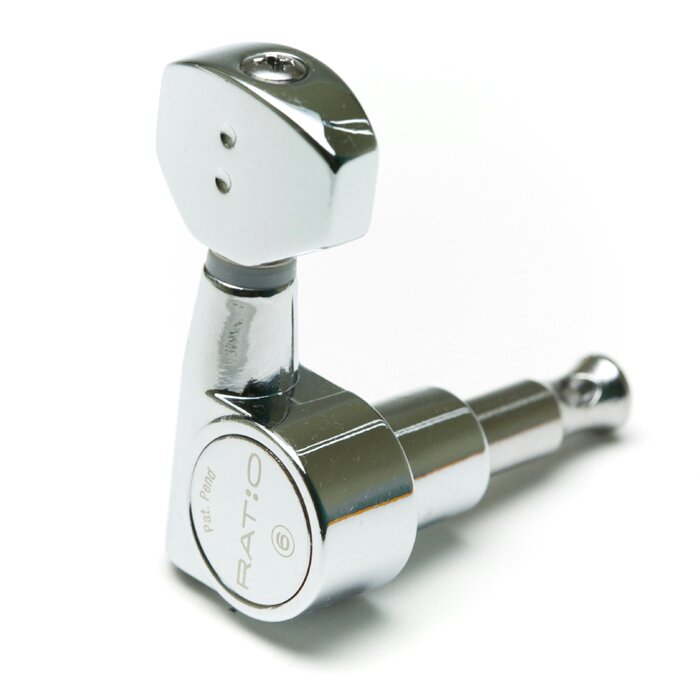 The Graphtech Ratio Tuned Machine Heads are a revolutionary new design for the humble machine head.

One of the things that bugs a lot of guitar players is tuning after a restring, or switching tunings. Some strings are quick to tune to pitch, others like the G string are so easy to over-shoot the correct pitch. This is due to the gear ratios of the gearing in machine heads. Machine heads have a fixed ratio for each tuner, for example 16:1. These numbers represent the amount of teeth on each gear. The problem is that wound strings are less sensitive and the thinner non-wound strings are more sensitive.  The differing sensitivities and the fixed ratios on machine heads is what causes common tuning issues.  So is there a way to make tuning an easier, faster experience?

Graphtech have stepped up to the plate with their brand new Ratio Tuned Machine Heads. These tuners incorporate a different gear ratio for each tuner, offering consistent tuning across all strings. Graphtech have a range of models to suit acoustic and electric guitars, and they were kind enough to send a six inline modern tuner set out to test. I installed the Ratio Tuned Machine Heads on my 2003 Ibanez RG 450 LTD, and set about stringing the guitar up for testing.

Ibanez typically install Gotoh or Gotoh style six inline modern tuners with a 45 degree angle mount on their RG line of guitars. Graphtech don’t currently have a six inline model with this, only one with two retaining pins. This made the install a little more difficult, but it’s nothing too daunting. Graphtech have excellent instructions in the packaging, and they explain installation nice and simply. Line up the tuners against a straight edge and tighten the retaining nut enough for the retaining pins to leave an indent. Remove the tuners, drill some shallow holes, just deep enough for the retaining pins to sink in and allow the tuners to sit flush against the headstock. Put the tuners in place and install the tuners with the washer and nut. Nice and easy, but there are some holes left over from the original tuners. These can easily be filled, and aren’t overly noticeable, but some may not be happy with having the scars left after installation.

Each tuner is marked with a number from 1 to 6, corresponding with the string they are designed to effectively work with. There’s very little chance of mixing up the tuners, but even if you do it’s simple enough to put them in the right order.

Once installed it was time to see what the fuss was about. Each Ratio tuner has a custom ratio suited to each specific string. The Ratio tuners are designed to allow the user to restring with each tuner’s ratio increasing pitch by one tone per revolution. It was amazing to see that in practice this actually happened. Hooked up to a strobe tuner it was clear to see that no matter which string was being tuned that the pitch increase was consistent across the board. It was extremely easy to predict when a string would be at the correct pitch and it was backed up by looking at the strobe tuner.

With this great design it’s also extremely easy to switch tunings on the fly. Want to go from E standard to drop D for example? Just turn the low E tuner counter-clockwise one revolution and the pitch will go from E to D in pretty much perfect tune. Switching from a standard to an open tuning is just as easy to land with just a few turns of each tuning key.

It’s extremely important for a tuner to be made of high quality components. If the gears slip then the strings will not have any chance of staying in tune. The Ratios are made just as well as any of the other quality tuners on the market, with solid casings and excellent gears that hold strings steady and in tune.

Overall the Graphtech Ratio Tuned Machine Heads are an extremely impressive new spin on a part that’s rarely given much thought. Being able to tune consistently across all strings may seem like a small thing, but it really makes tuning and playing so much easier. There’s only a limited range of models currently available, but hopefully Graphtech will see fit to expand on the range to include more options. If you find that tuning can be a little cumbersome with standard tuner designs, and like the idea of being able predictably and consistently adjust the pitch of the string definitely check out the Graphtech Ratio tuners.