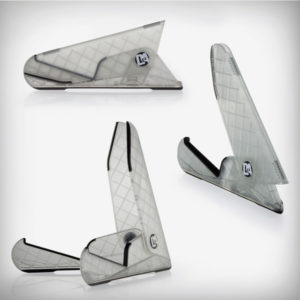 Floor guitar stands are one of those things that people generally don’t think too much about, and the designs are typically only good at one thing. They’re either great at holding a guitar, but rather cumbersome, or they are easily made compact, but hold a guitar rather precariously.

D&A Guitar Gear are a company that have taken both of these things and put them into one great portable electric guitar stand. The Icestand Electric guitar stand is built from lightweight plastic with lattice ribbing and re-enforced joints, resulting in a guitar stand that weighs about as much as a guitar cable. Despite it’s featherweight nature, the Icestand is capable of holding even the heaviest electric guitar. All points that come into contact with a guitar, and even the floor are covered in a soft polymer that is safe for all guitar finishes. What’s even better is that the Icestand can fold up into a nice compact form that can easily fit in any gig bag or guitar case. It all sounds fantastic in theory, but does it achieve all of these claims?

The Icestand is definitely lightweight, and when loaded in my gig bag it is not even noticeable. Setting it up, the Icestand locks together nicely, feeling nice and secure. The rubber feet ensure that the Icestand doesn’t slide around on even the slickest stage.

With a guitar in place the Icestand feels nicely balanced and steady. The guitar is only going to fall over if its given a decent knock. It’s not as rock solid on the ground as some stands, but those other stands are not nearly as portable. For a guitar stand that you would use when rehearsing or playing a show with your  band, or jamming with friends the Icestand is the perfect solution.

Overall the D&A Icestand is a fantastic design that achieves what is set out for it on paper. It’s super lightweight, and very strong, and more than capable of looking after your guitar where ever you go with it. If you are looking for a new guitar stand then definitely check out the Icestand.