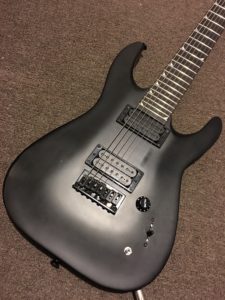 Periphery are one of the most influential progressive metal bands of the last ten years. Mark Holcomb is one of the three axe-slingers in the band, and he teamed up with Seymour Duncan to build a limited edition pickup to slot into his signature Paul Reed Smith guitars. The pickups drew a lot of attention on release, and eventually Seymour Duncan released the Alpha and Omega as part of their standard pickup range, making them available in six, seven and eight string formats. In this review I focus on the seven string models.

I installed the Alpha and Omega pickups into my Jackson JS22-7 Dinky, with a a poplar body, hardtail strat-style bridge, and a bolt-on maple neck with rosewood fretboard. I tested the pickups through my Orange Jim Root Terror, running into a 1×12″ cabinet with Celestion Vintage 30 speaker. I also tested them with an MXR Custom Badass Modified O.D. in front of the amplifier.

The Omega is loaded with a ceramic magnet, and has a resistance of 15.90 KOhms. It’s tone profile is one of moderate lows and mids, with a more pronounced high-end. The obvious place to start with the Omega bridge is with a good chunk of dirt on the Jim Root Terror. To say that the Omega is capable of delivering an aggressive and percussive tone is an understatement.  Dig into the low B or E and the Omega will dish out a massive snarling tone, with an attack that will cut through any situation. Low end chords and notes will smash the listener in the face with a huge, organic sound.

Note separation and clarity are paramount with the Omega. Notes ring out clear and strong through even the heaviest amounts of distortion. The mids are not so strong that they become overbearing, and they allow you to dial in the right amount from your amp. Treble-wise, the highs are nice and crisp, without getting too shrill. Complex chord work, the sort that Periphery are known for, are showcased perfectly with the Omega, allowing all notes to shine with great articulation and note separation.

The Omega responds really well to picking dynamics too. Picking softly dials back the aggression, with a slightly more rounded and cleaner sound, and grows in attack and aggression as you start to dig in.

Lead work sound fantastic all over the fretboard. From the lower reaches, to the highest peaks, the Omega dials up strong, full tone with plenty of articulation. You need to bring your A game if you’re going to shred with the Omega though, because it’s percussive nature and strong articulation it will put all your flaws on display.

Throwing my MXR Custom Badass Modified O.D. into the mix,  tightened up, and sharpened the sound all over, while still retaining all of the qualities the Omega brings to the table.

Rolling back the volume, and the Omega does a great job of cleaning up. Finger-pick, or pick super soft, and it generates a generally clean tone with a little glassiness. Dig in a little more and the hair appears on your chords and notes.

Dial in a clean tone on the Jim Root Terror, and the Omega really demonstrates how versatile it is. Don’t dig in too hard and there is a bright, glassy tone, without too much shrillness to the sound that works really well for all types of chords. Dig in a little more and things get a little more in your face with a hair of dirt in the higher frequencies.

The Alpha is loaded with a ceramic magnet, and has a resistance of 9.56 KOhms. It’s tone profile is one of moderate lows and mids, with a more pronounced high-end. Switching over to the neck position, and the Alpha is a little unique among neck pickups, in the way that it blends qualities found in both bridge and neck humbuckers. It carries the overall neck humbucker vibe, but manages to add some of that attack that you find on modern bridge humbuckers.

The Alpha offers a fairly rounded, glassy tone, with a little less output than the Omega. It never ends up in muddy territory, even further down the bottom of the fretboard. Throw copious amounts of woolly or sharp distortion at the Alpha, and it handles all with aplomb.

If you’re into using a neck pickup for huge sludgy rhythm sounds, the Alpha offers the perfect amount of hair and girth. The pickup provides a massive woolly wall of sound, with enough presence to still cut through a mix, even when chugging away on the low B string.

Hit the higher notes, and the Alpha just sings. Bends on the higher end of things sound so, so sweet. The combination of the rounded glassy tone and sharper attack almost feel like you’re playing a more traditional single coil strat style pickup. Start building up the speed and the Alpha does a great job of tracking notes, and keeping them clean and defined.

Roll back the guitar’s volume control, or dial in a clean tone, and the Alpha cleans up nicely. Chords sound nice and full, with a little sweetness on the top end. The Alpha gets a little sharper as you dig in harder, but always manages to stay quite clean.

Switching to the middle position to engage both the Alpha and Omega provides a true blend of both worlds. The low end is a little less powerful, and the mid-range sharpens up the tone a bit. The clean tone is a little more defined with greater presence, but the attack is a little softer than what is found in just the bridge position. With distortion you really find a middle ground that sits nicely between the two pickups on their own.

Overall, the Seymour Duncan Mark Holcomb signature Alpha and Omega pickups are an amazing addition to the massive high output humbucker market. These pickups can handle almost anything that is thrown at them, whether it be truckloads of gain, or the most ethereal of clean tones. If you’re looking for a pickup set that can do these things, and more, then definitely check out the Alpha and Omega pickups.