The DiMarzio Tone Zone, a monster pickup that takes some taming.

In the quest to make my Ibanez 20th Anniversary RG550 RFR really roar I decided to take on the DiMarzio Tone Zone. I had previously installed the DiMarzio PAF Pro in the bridge position, and as I mentioned in my PAF Pro review I found that it just didn’t drive my amp hard enough. I loved the tonality of it, but I didn’t want to have to kick an overdrive every time I wanted to use this guitar to get a similar amount of gain as I had coming from some of my other guitars.

The DiMarzio Tone Zone is a fairly polarising pickup amongst guitar players. It is a pickup that people either love or hate, and this love/hate relationship probably stems from its tonal properties.

With an Alnico 5 magnet, a bass and middle rating of 8.5, and treble of 5 on the DiMarzio scale, the stats give you an immediate impression of massive low end grunt. To some this is massive fat high gain heaven, to others its high gain mud.

As I had mentioned earlier I was installing the Tone Zone in my Ibanez RG550. This guitar has a basswood body, and maple neck/fretboard. Acoustically my guitar has quite a thick low-end, and this tonal property did worry me a bit since the Tone Zone has such a massive amount of low-end.

On the initial installation of the Tone Zone I was hit by a massive wall of low end tones from my guitar, and very little high end to help it cut through. It did concern me a bit as it was far too muddy for notes on the low E string. I wasn’t about to give up on it just yet though, and was fully prepared to tweak things.

I had previously performed magnet swaps on a couple of pickups, and tried out the “half-air” mod that a lot of people perform on Tone Zones, and was prepared to open up the pickup if needed. I wanted to try and increase the high end and drop the low end a bit without the need for pickup surgery though. 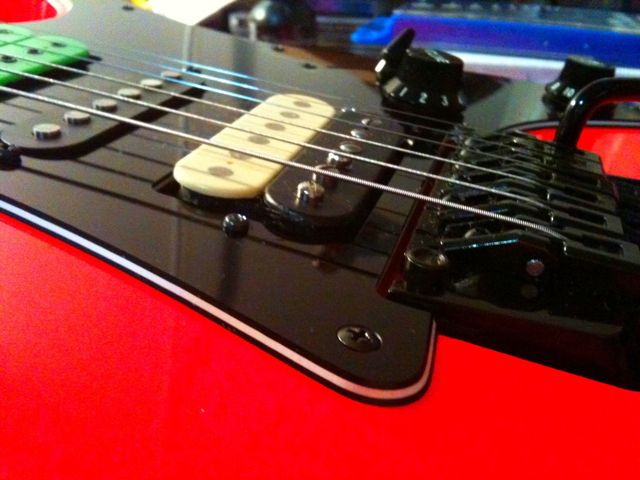 My setup for the Tone Zone, note the 3 raised polepieces on the bass side.

I found that the sound was far more pleasing after these tweaks. The low-end was still very big, but not in a bad way. Keeping the pickup fairly low from the strings tamed the low-end, and raising the pole-pieces added enough high end to give the pickup clarity to go with its massive punch.

The Tone Zone works fantastically for big heavy rock, punk and metal styles as it provides a great amount of chunk and grind. It also responds very nicely to your pick attack, which gives you far more flexibility than most high output pickups. Rhythm parts sound absolutely massive, and lead parts higher up the fretboard retain a fatter sound than what you would get from most bridge pickups.

One thing that needs to be remembered when talking about the Tone Zone is that in standard series humbucker mode it is not a very good pickup for clean tones. This pickup is designed to rock through the dirty channel of your amp. Through the clean channel it will sound big and nasty, with a slight overdrive that is pretty unpleasant. However split it and combine a middle single coil pickup and you will find some pretty cool Strat-like tones that work nicely both clean and overdriven.

The DiMarzio Tone Zone is a fantastic pickup for a huge rock sound. With a little bit of tweaking of the pole-pieces and the pickup itself you will find that you can have a massive low-end wall of sound, and still retain enough clarity to sound nice and articulate. If you haven’t tried the Tone Zone go and try it out, and if you have and found it too muddy maybe give it another go. Play with the pole-pieces and lower the pickup a bit, and you might find that you can tame the beast a little, and make it work to your liking.

I can’t believe that I haven’t already written an update for this review. You may have read all my posts about taming the Tone Zone (part 1, part 2, part 3). I learnt some pretty cool tricks throughout this process, but in this particular guitar (The RG550) I was never completely satisfied.

A while back I installed the Tone Zone into my alder bodied Ibanez RG-style custom. I reverted it back to the stock pickup before installing just to get an idea of what the stock Tone Zone would sound like in alder. Wow! That’s all I could say. Any short comings the Tone Zone showed in my basswood bodied RG550 were non-existent. The Tone Zone was perfect to my ears in Alder.

The Tone Zone is still big and brash, but not boomy. There is a great degree of clarity on single note runs, and power chords just chunk and grind in such an awesome way. I think I found my perfect tone with this setup, and now I really want to put together an alder strat type guitar with maple neck and fretboard, with a Tone Zone, and maybe some sort of single in the neck.

So if you have an alder-bodied guitar, and are looking for a big, fat, heavy sounding pickup that style has some nice clarity for single notes higher up the fretboard add the Tone Zone to the top of your list.