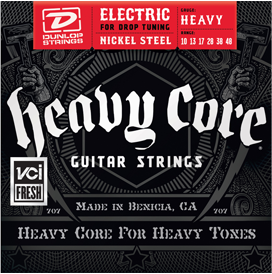 I have previously reviewed the  Dunlop Nickel Plated Steel Electric Guitar Strings, and when Jim Dunlop offered me the chance to review their new line of Heavy Core strings I just had to say yes. I loved the bright strong tone of the Dunlops, quick settling, and great longevity. I hoped for more of the same from the Heavy Cores, and they didn’t disappoint.

Heavy Core strings feature a thicker core, which enable them to retain a standard tension for dropped tunings, or higher tension in standard tuning.

I used the 10-48 Heavy gauge tuned to standard E or dropped D on my 24.75″ scale Les Paul style guitar. This is a little heavier than the standard 10-46 gauge most would use on a Les Paul type guitar, and it is definitely noticeable. As I expected ,bending strings required more effort then when using a standard 10-46 gauge, but it was worth it for the extra tone.

Dunlop also talk about their Heavy Core strings “adding more punch and growl to your tone”, and “giv(ing) your guitar’s voice more power, depth and strength”. I did notice that my guitar’s tone definitely sounded a little bigger and fuller when played acoustically. Plugging in and cranking up the dirt, I noticed the guitar roared a little more than previously with it’s standard gauge strings. Clean tones yielded a little more aggression as well.

Harmonics of both the natural and artificial variety really pop from the Heavy Core strings. Zakk Wylde style pinch harmonics really blast out with great definition. The thicker core also seems to add sustain, so throw in some sweet vibrato in and your notes will sing for days.

I’ve been playing this set of strings for a few weeks now, and they are holding up really well. No real corrosion has appeared on them, and they still sound as good as they did when I first put them on.

Dunlop also pack them using their “VCI Fresh” packagjng, so they are as fresh as the day they were manufactured when you open the package up.

On the subject of stringing my guitar up with the Heavy Cores I found them to be just like the regular Dunlop strings, with a nice quick settling period

Overall the Heavy Core 10-48 Heavy gauge strings are a fantastic string for those into playing heavy music. Dropped tuners, and standard tuners looking for a set of strings with real power and sustain will love these. I particularly found that my tone really benefited from the extra tension when tuned to E standard, and the extra work required for bends was definitely worth it. These strings will really let your playing roar and scream where needed. I can imagine how great these will be at dropped tunings.