My Strat build project has been progressing since my last post on the topic. I have sprayed eight or nine coats of polyurethane on the neck, but not without some issues. I have also ordered a white MIM Stratocaster body. I was originally planning on buying a pretty much new white Squier Classic Vibe Stratocaster body, but it sold before I had the funds ready to purchase it. A shame really as it was in perfect condition, but hopefully the MIM Strat body I ended up buying will be nice enough.

Back to the neck though. Everything was going swimmingly with the clear-coating process. There weren’t too many runs or dust stuck in the polyurethane, and the back of the neck was feeling nice and smooth. I had the neck sitting out on a spare chair in my studio because I didn’t want to wrap it back up in the foam it came packaged in until I had ensured that the clear had completely cured. Nothing worse than stuff sticking to paint that hasn’t cured properly.

The damned fretboard dent. I might try drop-filling it with super glue, sand and re-coat it later on.

I was cleaning out some cupboards, getting rid of old computer parts, and while doing this I accidentally knocked out a power supply. At the time I thought it had just hit the ground, but later on in the day I was inspecting the clear coat and noticed that the power supply had in fact hit the neck, and dented the fretboard! Needless to say I was pretty annoyed about this. I was almost out of clear, and I could no longer do the soldering iron and damp cloth dent repair trick since I’d used polyurethane. I had to reseal the dent though, so I started on spraying the neck again. In this process I ended up with some runs on the headstock and fretboard. Never work on stuff when you are annoyed! The runs on the fretboard were pretty minor, but the one on the headstock  was a bit more prominent.

Once I’d let the clear cure for a while I got onto lightly sanding the runs on the headstock and fretboard. The fretboard ones disappeared fairly easily without losing all of the clear coat, but the headstock one was a bit harder. I had run out of clear coat, so I managed to sand the run down enough so that it’s barely visible now, and with a bit of polishing most of the marks on the headstock are now very hard to make out. This will do for me, as the guitar will be a player that will get knocked around. 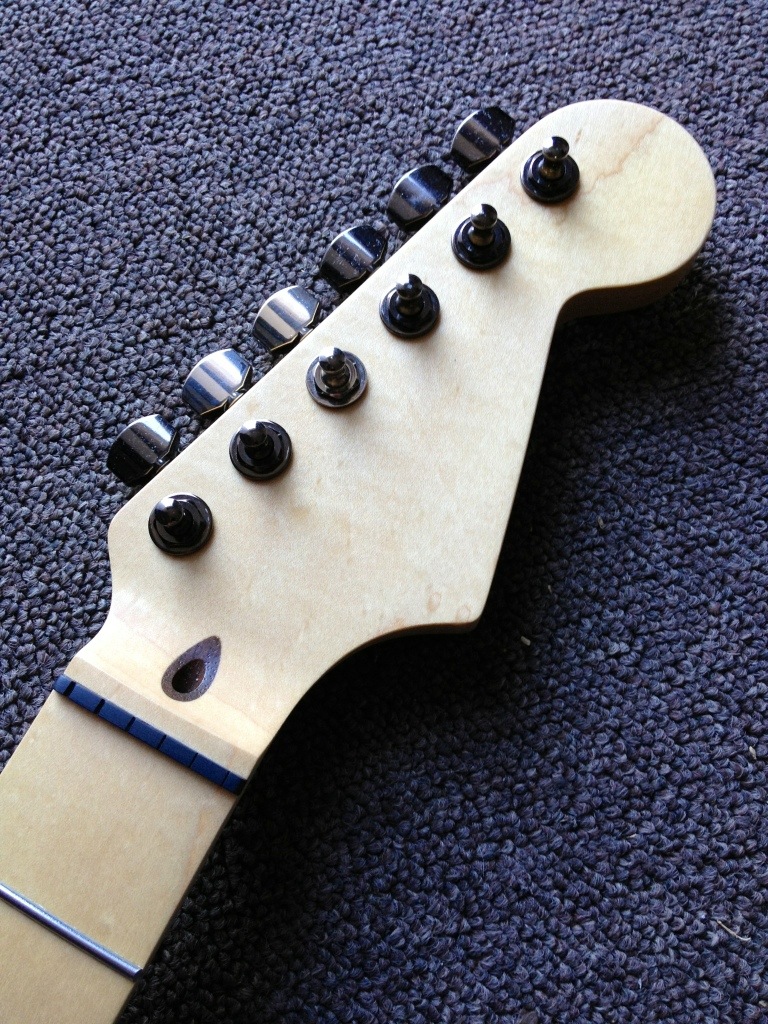 The headstock isn’t looking too bad after a bit of a sand and a polish. Test fitting some spare Gotoh tuners I have lying around. This will be getting some black ones, hopefully staggered locking tuners.

The next step was getting the clear coat off the fret wire. I was going to order a fingerboard guard, or tape up the fingerboard and work the fret wire with steel wool to get the clear off, but I ended up just scraping it all off over a several sessions with a rag and my finger nails. It took a while, but saved me having the masking tape mess up the clear, or waiting around for a fingerboard guard to arrive in the mail. The clear is mostly off the frets now, and if there’s any little bits of clear left it’ll come off while playing.

During this time I’ve also ordered a neck plate, gasket and screws for mounting the neck to the body. I’ve gone with a black etched neck plate, featuring some vintage pin-up girl art. I’m thinking of doing the guitar up with a few similar looking decals. Not entirely sure yet though.

One of the special parts of this build is going to be the bridge. I’m going for the vintage six screw Stratocaster type bridge, but it is being built by a custom guitar and guitar parts builder, and will be made from a metal not normally used in guitar bridges. The plans for the build have been sent to me, and I’m looking forward to seeing some progress pictures detailing the creation of the bridge.

Hopefully the body and neck plate and screws will arrive this week, and I can start to put the guitar together. I still have a bunch of parts to order to finish it off, hopefully I’ll have it finished before Christmas. 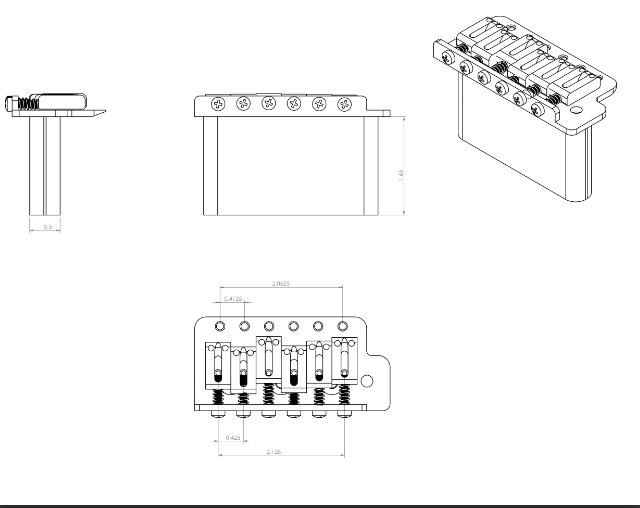 Plans for the custom bridge. Can’t wait to see the finished product! 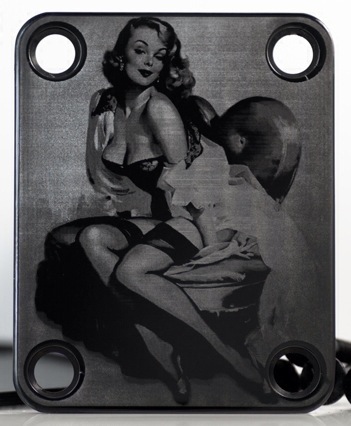