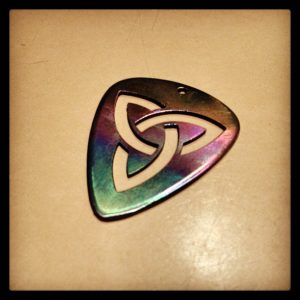 Kickstarter has been a great thing for musicians and musical equipment creators. A recent Kickstarter success is the Epic Grip titanium guitar pick. this single guitar pick design shot over its $5000 budget to over $35000, well and truly establishing itself as a popular new product. Since I really have a thing for titanium, and I love to try out new picks I contacted the Epic Grip creator John Wundes to see if it were possible to get a pick to test and review. John was happy to oblige, and sent me one of the prototypes to test out.

The Epic Grip titanium pick is a fantastic size. It’s a hair smaller than a standard size guitar pick, and whilst the tip isn’t quite as sharp as a Jazz III for example, its no where near the rounded tip of a standard guitar pick. The Epic Grip is a hair thinner than a black Jazz III XL, probably clocking in at about 1mm thick.

One of the best parts about the Epic Grip is where it’s name sake comes from – the grip. The cut-out logo in the pick makes for a massive grip. the grip is so good in fact, that if you want to shift where the pick is in your fingers when playing it is actually a little difficult!

Tonally the Epic Grip is an interesting one. It has a very percussive attack, which really works nicely for tight riffs and licks. The pick provides a nice firm low end, and despite what you might think you get from a metal pick the high end isn’t too sharp or shrill. It also creates a slightly hollow, scooped mid range tone, which really works nicely for heavy, chunky riffs. Being metal, the Epic Grip makes for awesome pick sliding goodness as well, with fantastic shrieking noises on tap.

Being made of titanium means that the Epic Grip will outlast pretty much any other guitar pick. The downside of this is that the pick is a little harder wearing on guitar strings. The Ernie Ball Cobalts I have on most of my guitars really took a hit after a heavy session. No strings have broken so far, but the wear is noticeable enough on the strings. This is probably only really an issue if you’re not someone who changes their strings regularly.

Overall the Epic Grip titanium guitar pick is a fantastic pick. The epic grip that it provides, and the incredible tone that it helps you create, combined with a really reasonable asking price of $12USD makes for one hell of a deal. You probably wouldn’t buy a heap of these and use them on stage, losing one would be a bit of a loss, but with its reasonable costs, and fantastic tone you really can’t pass up having one or two (or more!) at home for practicing, jamming and recording. Pre-orders are happening now, with shipments happening in November, so get in there and get your hands on one of these  hot picks.