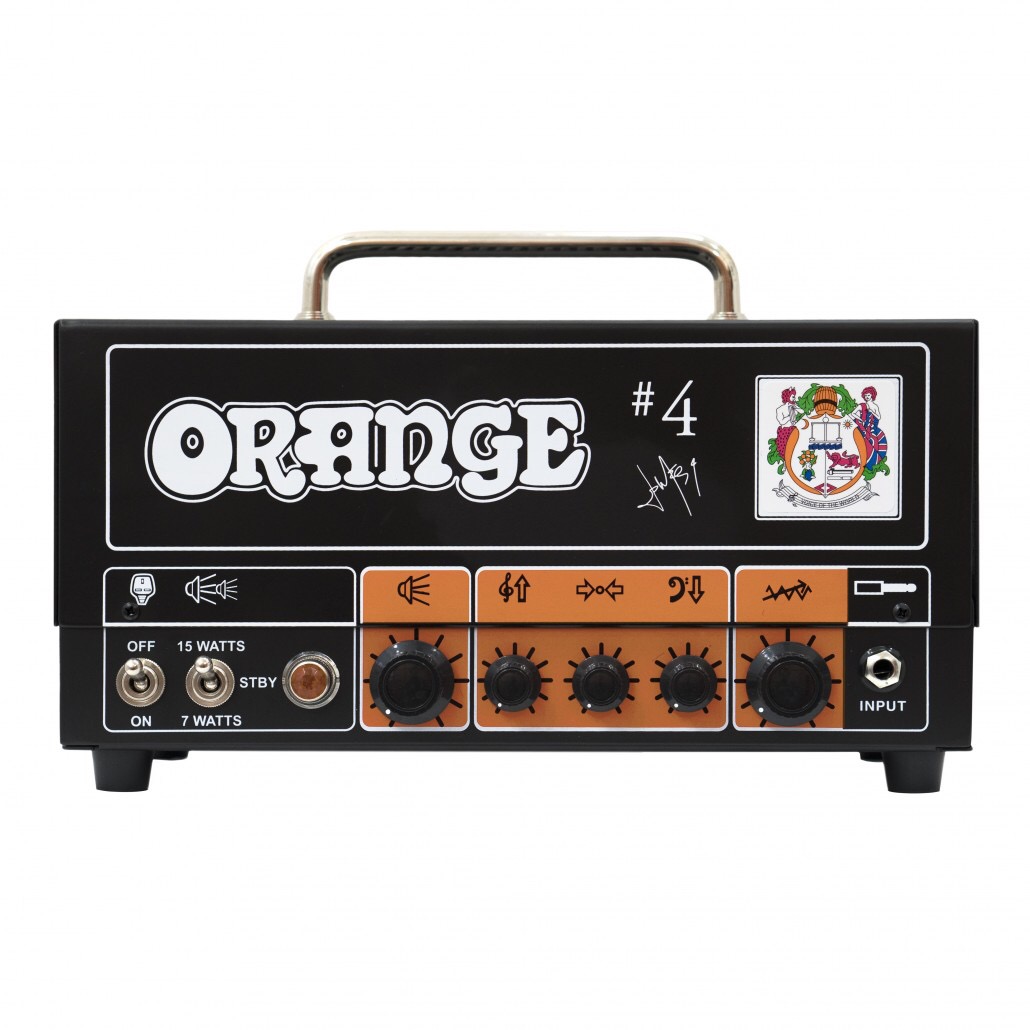 Anyone who knows me is aware that I am a huge fan of low wattage valve amps. I have been using the first generation Blackstar HT-5 head for over 6 years as my primary amplifier, both at home for practice, many of my blog reviews and demos, and with my band Sewer Sideshow. I’ve used it in rehearsals, on stage, and recorded my band’s first EP with it, and it has never let me down.  I recently performed some outdoor shows where we didn’t have a PA setup that could mic our amplifiers and drums, and found that my trusty HT-5 just didn’t quite cut it in an outdoor setting, so I started looking at some larger output amplifiers to cover these bases. I still wanted to go low output, so nothing over 20 watts. My main picks were the Blackstar HT-20, based on my positive experiences with the HT-5, and maybe one of the higher gain Orange Terror series amplifiers. During my eBay browsing I found an Orange Signature #4 Jim Root Terror head on auction, and managed to score it for a good price.

The #4 Jim Root Terror has the same basic cofiguration as it’s other Terror brethern. Steel lunchbox chassis and 2 EL84 valves in the power section with 15watt/7watt power scaling capabilities, but from here things get a little different. The preamp section contains 3 12AX7 valves, and is based on the dirty channel of Root’s favourite Orange amp, the Rockerverb 100. The Jim Root Terror also comes with a handy 12AT7 valve driven effects loop. The front of the amp is decked with a master volume, 3 band tone stack and gain controls. Alongside the send and return jacks of the effects loop are two 8ohm and one 16ohm speaker outputs.

I put the Jim Root Terror through it’s paces through my Celestion Vintage 30 loaded 1×12″ cabinet, and a range of guitars tuned from E standard to Drop C.

Starting off, I wanted to replicate tones similar to the ones I get from my Blackstar HT-5 for my band, Sewer Sideshow. The heavy, crunchy, punchy tones that kick through a mix without being overbearing or drowning out the other instruments. I dialed the Terror’s gain to 1 o’clock, the bass to 12 o’clock, mids at 3 o’clock and treble full on, and found a tone very similar to my preferred HT-5 tone. Fat and punchy, great heavy crunch, just enough mids to cut through the mix nicely, and a high end that sings without being piercing. The Jim Root Terror provides a massive, three dimensional sound with rich harmonic overtones that belie this diminutive little amplifier.

As one would expect from a signature model from the guitar player of one of metal’s juggernaught bands, the Jim Root Terror has a ridiculous amount of distortion on tap. On it’s own, the Terror at full tilt will produce crazy heavy distortion, perfect for sludgy death and doom metal tones. Throw a familiar green TS type overdrive pedal in front of the amp and brutal, razor-sharp tight tones for more technical metal mayhem are easily obtained.

The Jim Root Terror handles lead guitar duties with aplomb. Smooth, liquidy tone with oodles of sustain make this amplifier a shredder’s dream. It offers an incredible response to a players touch, allowing a range of harmonic and dynamic overtones that will delight both the player and listener.

Don’t think that the Jim Root Terror is a one trick pony though. For a high gain, single channel amplifier, the Terror is incredibly versatile. Beautiful, lush clean tones are available with the gain turned right down, and even with plenty of gain dialled in a player can achieve great cleans with the right pickups or switch position by rolling their guitar’s volume down. The three band eq offers the player a wide array of tones, with the capability to cover a range of styles and genres.

The icing on the cake that is the Jim Root terror is it’s 12AT7 valve driven effects loop. It provides a balanced, transparent pathway for your delays, modulation effects, and what ever other pedals you like to run between the power and preamp stages of an amplifier.

As with the rest of the standard-sized Terror series amplifiers, you can switch between 15 watts and 7 watts of output. Both modes are capable of quite a bit of volume, but the 7 watt mode is a bit quieter, and the tone a bit less dynamic. It is still completely usable and sounds great for home use.

Overall the Orange signature #4 Jim Root head is a brilliant amp that is far more versatile than it may look.  It is capable of covering a range of musical styles, from blues and classic rock, through to modern, hard rock, punk and hardcore, and metal of all styles. It easily carries enough volume to to be used on stage, even with the loudest of drummers. If you are looking for an amplifier that can generate killer tones, heavy  or otherwise, and won’t break the bank – or your back, then definitely check out the Jim Root Terror.