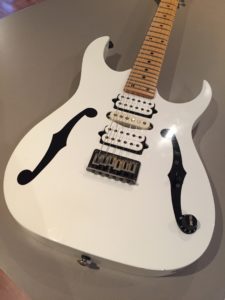 I’ve not typically been one to GAS over signature guitars, but the one signature guitar that I’ve wanted to get my hands on for many years is the Ibanez PGM301 Paul Gilbert signature guitar. I’ve traditionally played Ibanez RG series guitars, so the body shape suited me, and I’ve always preferred maple boarded necks. The hard tail bridge was a departure for me, but I was completely sold on the guitar when I finally had the chance to play one in my local music store. The only problem was that at the time I did not have the coin to spend on one. Fast forward several years, and I decided that I should finally treat myself to one, and embarked on the search for a good example for a decent price.

I finally found one that seemed reasonably good on eBay and placed my bid. I was pretty excited when I won, and the anticipation grew as I waited for it to arrive from the US. That excitement dropped somewhat when the package finally arrived, and I got home from the Fed-Ex office. What was advertised as an 8.5-9 out of 10 condition ended up being lucky to hit a 7 out of 10. The guitar was filthy, dinged more than advertised, and the hardware was badly corroded. I set upon pulling the guitar apart, and cleaning, and fixing or replacing what I could. I got the guitar to a decent state, although I’d still like to restore the guitar completely. See the gallery below for the condition it was received in, and some after-restoration shots.

The PGM301 features a basswood RG-styled basswood body, with Gilbert’s signature F holes and single volume and pickup selector layout, Gotoh GTC101 string through hardtail bridge with brass baseplate and saddles, and two DiMarzio PAF Pros, with a DiMarzio Jem single coil in the middle. The neck is a PGM Prestige spec profile, with five piece maple/walnut construction, and a maple fretboard. The reverse headstock comes with Gotoh SG381 non-locking tuners, and a Graphtech TUSQ nut.

Upon picking up the PGM after everything had been cleaned and set up, I was reminded of that moment I played the PGM301 in store years before. The basswood RG styled body and maple neck combo, along with hardtail setup makes for a nicely balanced guitar that does not feel too heavy. The neck is a variation on the Prestige Wizard shape, and is super comfortable in the hands. The slight variations from the Wizard neck profile, alongside the 430mm radius maple fretboard, and jumbo frets makes for a neck that provides effortless playability.

The Gotoh GTC101 bridge is a very simple affair, but everything about the bridge makes sense in the tonal and playability stakes. The string through mounting provides a solid connection for the strings and guitar, giving the PGM301 the potential for a full sound with solid sustain. The brass saddles and baseplate also contribute to this, and also contribute to a beautiful full musical tone, even when playing acoustically.

Some would consider locking tuners to be a requirement for tuning stability with any guitar with a non-locking bridge and nut setup, but the PGM301 definitely proves that it’s not always necessary. The bridge, along with the Graphtech TUSQ nut, and Gotoh standard tuners keep this guitar in rock-solid tune through all the shredding and string bending.

All of these factors result in a guitar that plays brilliantly. Low action, with amazing sustain, musical tone, and minimal string buzz make for an incredibly versatile and capable guitar for any style a player may want to cover. And considering Paul’s level of musical skill, and ability to cross so many genres, this guitar just makes perfect sense.

As mentioned earlier, the PGM301 comes loaded with DiMarzio PAF Pros in the bridge and neck, and a Jem single in the middle. I’ve reviewed the PAF Pro previously, and as discovered them to provide a musical tone that cuts through the mix well. I originally found that the PAF Pro in the bridge position didn’t drive the amp quite as hard as I’d like, but in the PGM301 it is quite useful for most genres. You wouldn’t use the PAF Pro for heavier types of metal, but it is quite capable for most heavy blues, rock of all forms, and more traditional metal tones. It’s great for clean rhythm work, and provides excellent note separation.

The PAF Pro is brilliant for lead playing, and it’s clear as to why Gilbert used this pickup on so many of his guitars. The PAF Pro in the neck position is even more amazing for overdriven lead tones, and offers a nice alternative clean sound to the bridge as well.

The Jem single is a hum-cancelling single coil that provides a pretty basic single coil tone that probably works best when its combined with the split PAF Pros. It’s nice for clean and and overdriven stratty type sounds, which just adds to the versatility of the PGM301.

So the PGM301 sounds like a pretty amazing all-rounder, with very little negative aspects to it. The only real downside, in my opinion, is the use of cosmo black plating on the hardware. Whilst it looks amazing when in as new condition, it’s not nearly as robust as a basic black or chrome coating. I received this guitar in a very much used condition, and the Gotoh hardware was definitely pretty hammered. The saddles have a bit of the natural brass showing through the saddles, and the tuning machine buttons were showing a lot of wear. I replaced most of the buttons with some spares I had in my spare parts drawer, and managed to track down one stock strap pin, but at the end of the day I’d like to get the bridge replaced, and the remainder of the the other hardware.

Overall, the Ibanez PGM301 Paul Gilbert signature is a fantastic guitar that can cover so much musical ground. You don’t need to be a virtuoso shredder to appreciate what the PGM301 offers. The painted F holes provide a bit of a ‘signature’ look, but not so much that it screams a particular player or style. If you’re a Paul Gilbert fan, or just looking for a solid playing guitar that can cover a range of styles, and do it in style, you can’t go past the Ibanez PGM301.