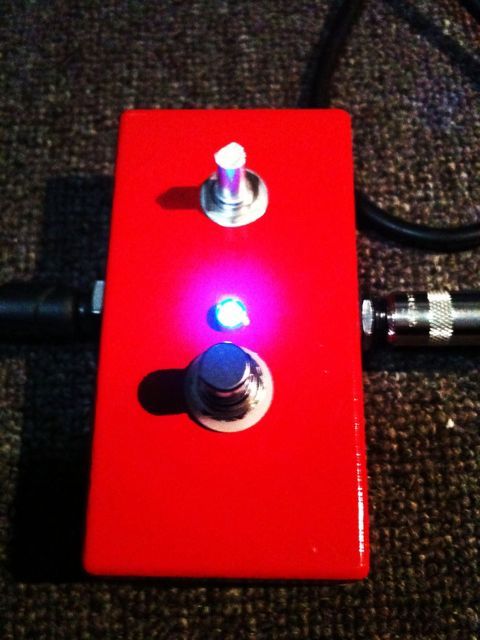 After the success I had with building my “Green Envy” overdrive pedal from a cheap Daphon E20OD Overdrive pedal I thought it was time to try and build an effects pedal from scratch. Doing some research on the Internet I discovered DIY-Layout.com, a site dedicated to stripboard layout effects pedals.

I figured stripboard pedal designs was probably a good starting point. Making PCBs involves nasty chemicals, and perfboard is a little more involved when it comes to joining components.

Looking through through the repository of layouts I decided the safe bet was to design a really simple circuit with minimal parts as my first project.

I chose the EHX LPB-1 clone based on the fact that there were minimal parts, and no integrated circuits or op-amps to deal with.

I went to my local electronics store with a shopping list of parts that I didn’t have already in my slowly growing collection of components, and picked all parts I needed.

If you are interested in trying out this project here is a list of the parts required, aside from the stripboard, enclosure, jacks, switch 9V battery snaps, etc:

Two trace cuts are needed (the white boxes with red dots). Carefully use a Stanley knife or even a small drill bit to cut the copper that links the points together.

I first attempt to build the circuit proved to be a failure. I was half-asleep, and when laying out and soldering my parts I realised once I had almost finished putting everything in that I had aligned the stripboard the wrong way! I was following the layout as per the diagram, but had the strips running vertically, not horizontally like the diagram.

I was silly enough to only buy one of the transistors required for the build, and of course when I tried to de-solder it from the board Murphy’s Law kicked in. I thought I had heated up the solder points enough to pull out the transistor, only to find that when I had removed it only one of the legs remained!

So a trip a trip back to the electronics store was required before I could continue with building the pedal. I picked up extras of everything that I didn’t already have multiples of, and also picked up the enclosure.

So I went about my second attempt on a new piece of stripboard, and other than making a couple of mistakes with trace cuts, which I fixed up by wiring components directly over the cut I finished off the circuit, and hooked up the jacks, 3PDT switch, battery snap, and LED with resistor, following this diagram on Beavis Audio.com to see if I could get any signal.

I hooked up a trusty Duracell, plugged a guitar and amp into the circuit, turned up the volume, and hit the strings. Nothing… I had in fact created an elaborate switching system to turn an LED on and off!

I found the diagram linked above a little confusing to read when it came to wiring up the 3PDT switch, and had a couple of goes at it, but no luck. Thanks to some advise from the people on diystompboxes.com I was able to diagnose that I had in fact overheated and killed my 3PDT switch during the rewiring attempts.

Thankfully I had a spare one in my parts box, and after finding a wiring diagram that I could understand a bit better over at General Guitar Gadgets I got back to work on getting my LPB-1 circuit working. I hooked everything up and tried again, but still no signal through my circuit. I tested all my connections with a continuity meter, and whilst everything in the circuit seemed good I was getting nothing through to my output jack.

I asked again for help at diystompboxes.com, and posted a photo of what I had done so far, and thankfully one member had noticed that I had wired my jacks the wrong way. I was using  “switched socket” jacks, and I had wired my output jack to the wrong side. I hadn’t used this sort before in any application, so didn’t understand how they worked. Once I wired the output correctly I plugged in my guitar and amp again to see what would happen.

This time I actually got a signal when bypassed, but nothing when the effect was switched on. I had a look at my circuit and realised that I had forgotten to fix one of my accidental trace cuts. This was an easy fix, and after patching a wire between two components I was ready to try it again.

Hooking up everything again and hitting the switch I was greeted by a big fat toneful signal, which was a bit thicker than my clean signal, and slightly overdriven on the clean channel of my amp too. It was working!

I spent last weekend painting my 1590B type enclosure in a nice bright red that I had left over from repainting some parts on one of my cars, and yesterday evening I got started on housing my circuit. I quickly learnt that even though I drilled my enclosure following a diagram that it wasn’t going to be the best fit with the components I had.

I eventually manage to given everything housed in the enclosure, and after a few re-soldering jobs, shortening and lengthening wired connections, etc I was able to get everything in, and the effect working.

This project was a great learning experience, and I have gained much insight on building pedals. I now know that I should spend a bit of time ensuring that components will all fit neatly, and leave room for the circuit itself before drilling holes in the enclosure, single gauge wires are a pain to work with due to their lack of flexibility, and their ease of breaking at the points the ends are soldered to. Also, whilst 3PDT switches are very rugged looking, the lugs on the bottom of them are extremely susceptible to overheating when wiring things up. Remember this, as they are going to be probably your most expensive component most of the time. You don’t want to be killing them.

Next I’ll be trying my hand at building a simple fuzz or distortion circuit.