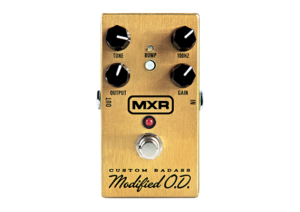 Not just another green overdrive clone…

The humble green “overdrive pedal” that has been around for around thirty years would have to be one of the most popular pedals on the face of the planet. Almost every guitar player would have at some stage played one of those green models, or one of the multitudes of clones and variations out there. In 2012 Jim Dunlop released a new variation of this oft-used and copied pedal design to the market in the form of the MXR Custom Badass Modified O.D. Not content to be pretty much an exact clone like so many others, the Custom Badass Modified O.D. offers some really nice features to make this one brilliant pedal.

First up we have the three standard controls found on most overdrive pedals, Output, Tone and Gain. These are all pretty much self-explanatory, doing exactly what you would expect. The extras come in the form of the 100Hz cut and boost control and a Bump switch. The 100Hz control allows for a sharper, more focused tone when cut, and a fatter tone when boosted, and the Bump switch engages an EQ voicing that boosts the lows and mids. Other than that the Custom Badass Modified O.D. is built in a solid, if lighter than the standard, MXR metal housing, with true bypass switching.

Starting off on the clean channel I dialed in a fairly transparent tone with the Tone at about 11 o’clock and 100Hz at about noon. With the Bump switch disengaged the Output needs to be at about 3 o’clock for unity gain. With the gain at 9 o’clock the Custom Badass Modified O.D. gives off a nice light crunch that works perfectly for gritty blues and lightly overdriven classic rock. Push it up to noon and the tone gets even more crunchy, working well for heavy blues tones and modern rock crunch. Once the gain is pushed to 3 o’clock and above the tone gets more saturated and compressed, taking you into hard rock territory.

The Bump switch not only enhances the lows and mids, but also cranks up the volume. I dialed the output back to noon to get balance out the volume between bypassed and pedal tones. People who want to play clean parts, and then switch up to slightly crunchy, fatter tones will dig what the Bump switch brings to the mix.

Switching over to the dirty channel with the gain on the amp dialed to noon I tried using the Custom Badass Modified O.D. as a boost to saturate and compress the already quite dirty tones I  get from my amp. I also left the Bump switch on to really fatten things up. At 9 o’clock the tone is already at full, fire-breathing metal fury. The saturation is pretty intense, but there’s still plenty of crunch on tap to keep things sharp. Push the gain to noon and further and things just get more and more extreme. Articulation is lost a bit for precise rhythm parts when you go further with the gain, but sometimes you’re not after precise sharp parts.

The Custom Badass Modified O.D. is brilliant for boosting solos with over the top saturation for fluid lead tones as well. It’s possible to pull out almost endless sustain, verging into singing feedback. The 100Hz control is fantastic for fattening up the tone if desired.

The above video demonstrates the Custom Badass Modified O.D. with fairly transparent settings, but that’s not all that the pedal does. The 100Hz control has a major impact, with everything below noon really cutting back the tone, making it a lot sharper and more focused. This probably gets the pedal sounding more like the original design it’s based off. Push it past noon and everything just gets bigger and bigger. Metal players in particular will probably really dig this pedal just for the 100Hz control. The tone control offers a wide sweep, but never gets too woolly or shrill.

Dirt pedals are always going to add a little noise to your signal, amplifying and clipping sound always will. The Custom Badass Modified O.D. is built with great quality components which ensure that noise will not be too out of hand unless you are pushing distortion to the extreme.