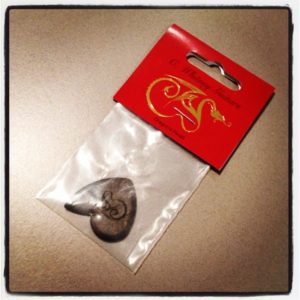 Guitar picks are a lot of fun to try out, and the market today has so many options. Different shapes, sizes, thickness, build materials, the options appear almost endless. Dragon’s Heart are a relatively new player in the market, offering a range of picks that not only have three different picking edges for versatility, but are made from polyamide-imide, a material used in aerospace applications as replacement for metallic alloys. There are three models available, up for review is the Hardened model.

The Hardened Dragon’s Heart pick is slightly different to the regular model. It is a glass filled variation, giving it a very durable quality. Dragon’s Heart vouch for up to 1500 hours of play. That’s a long time!

Now the pick has an interesting shape, offering a whole bunch of versatility, but how well does it pull this off?

The pick is an extremely thick at around 2.5mm thick. This may seem unwieldy to some, but the bevels make nice and easy to play, but still has the benefits of a thicker pick. The material used in the construction also grips nicely between the fingers. The etched Dragon’s Heart logo also helps the grip.

There are three distinct playing edges that each offer a different tone, pick attack and feel. The primary lower edge is closest to your regular pick’s point. It’s a nice in-between point that offers a balanced attack that works well for both rhythm and lead playing. The point rolls off the strings nicely and works well for both big chord playing and more precise picking. There is a nice bright snap to the tone that makes each note nice and clear.

The sharp edge gives a much more aggressive attack and works nicely for speedy lead work. The attack is even snappier, and a little brighter than the first point. It’s not nearly as forgiving as the first point, but it will help you get cleaner and more precise with your lead work.

If you are looking to do more strumming of big chords then the rounded edge works nicely for this. It has a much rounder attack, and warmer tone that can work especially nicely for clean rhythm work. The edge really rolls of the strings nice and smoothly, with no catching or clattering.

Players that perform a lot of pick scrapes will be wondering if the Hardened Dragon’s Heart pick lives up to it’s name. Whilst the material used for the pick holds up well to picking and strumming, scraping the pick against the strings does leave some marking on the picks edge, wearing down the beveling and occasionally leaving some very small gouges. If you aren’t too heavy with your scrapes and ensure that you are using a side that won’t come into contact with the strings when picking it probably won’t be an issue.

Overall the Dragon’s Heart Hardened pick is an interesting design that offers a great deal of flexibility and versatility.  At around $10USD , the Dragon’s Heart picks aren’t nearly as cheap as your standard run-of-the-mill guitar picks, but neither are they the most expensive. When you take into consideration the versatility the picks offer, and how durable they are, the price doesn’t seem to be nearly as much of an issue. If you are looking for a pick that gives you great versatility and also push your picking development then definitely check it out.