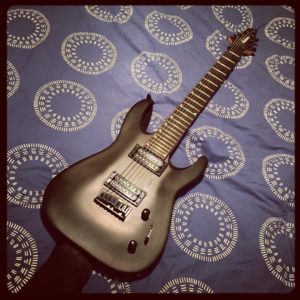 I’ve been considering the idea of getting a seven string guitar for some time, and just before Christmas an offer that could not be refused for one came my way. The singer in my band was looking to sell a Jackson JS Series Dinky JS22-7, and since the price was right I jumped on it.

The JS22-7 Dinky is a fixed bridge 26.5″ scale guitar, with an arch-top poplar body, string through body hardtail strat style bridge, with a bolt on graphite rod reinforced maple and 24 fret rosewood fretboard. It is equipped with a pair of Jackson High Output 7 String Humbucker pickups, 3 way blade-style pickup selector, and a volume and tone control. Seven string guitars are commonly associated with modern metal music, and like the Model T Ford, the JS22-7 comes in one very metal appropriate colour, satin black. Hardware is all black, and the headstock comes with the slightly irregular 3×4 layout Jackson headstock in matching satin black.

Acoustically, the JS22-7 is quite impressive for a budget guitar. The example I have resonates very nicely, and the combination of poplar body and maple neck and rosewood fretboard offer a very nice balanced tone that doesn’t get too muddy. The 26.5″ scale length ensures that the lower strings don’t flub out too much, and whilst it feels like a bit of a stretch at first, the slightly longer scale length isn’t too unwieldy for the seven string newcomer.

Plugged in and the Jackson High Output 7 String Humbuckers offer a reasonable tonal palette. Most stock pickup in lower end guitars commonly range from rubbish to average, but the Jackson ones in the JS22-7 are fairly balanced, if a little two-dimensional in sound. The bridge pickup is a little muddy on the lower notes, but cuts through and cleans up generally pretty well. It’s a little too bright and brash with a strictly clean tone, but most players wouldn’t use it on it’s own for a clean tone. The middle position on the pickup selector offers both humbuckers together, and it provides a pretty decent clean tone, and a slightly less aggressive lead tone with some dirt added. The neck pickup on it’s own provides a reasonable warm distorted lead tone higher up the fretboard, but is probably a bit useless for most lower down. Clean it’s also probably a bit too muddy for chord work.

The JS22-7’s neck is a nice slim “D” shape, and a relatively flat 16″ fretboard radius. As someone who has had a lot of experience playing Ibanez guitars, the JS22-7 feels quite natural to move onto, even with the extra string and neck width added in. The fretwork and general setup can be a little inconsistent with lower-end, budget guitars, but this example came very nicely set up, with no sharp fret-ends and nice moderately low action.

So far, the JS22-7 is scoring pretty well for a budget guitar, but it does have it’s downsides. The stock Jackson tuners are rubbish, and slip out of tune fairly easily. A tuner upgrade will do the JS22-7 a world of good, but the tricky part is finding tuners that are a direct fit. there are few stock packaged options for 3×4 tuner sets, and the ones available will require a little modification to install. The electronics are a little noisy as well, but it is cheap to replace pots with decent quality ones. On the subject of upgrades, a serious player would look at upgrading the pickups to a better quality set too.

The tricky part with budget guitars is that once you look at pickup, electronics, and tuner upgrades you may be spending close to the guitar’s original value on upgrades. Thankfully the JS22-7 provides a pretty sound base to build upon, and is definitely worth the upgrades if you plan on keeping the guitar for a while.

Overall, the Jackson JS22-7 Dinky is a solid guitar that provides massive bang-for-buck value. It plays a lot better than many may expect for a low-end guitar, and provides a solid foundation for those starting out on the seven string guitar, or even those looking for a backup for their higher-end seven string axe. A few upgrades will turn a nice guitar into an absolute beast of a guitar that would provide a player with many years of great service. If you are looking to jump into the seven string world without spending too much coin, or looking for a solid dependable back-up seven string, the JS22-7 Dinky is definitely worth checking out.