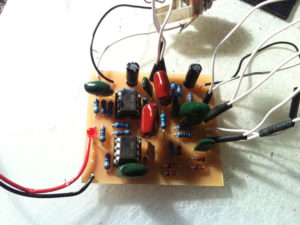 One of my favourite tone memories has been that of the Smashing Pumpkins on their first few albums. The massive thick Big Muff tone always sounded phenomenal to me. Despite my love for this tone I never really had a need for a Big Muff, but since modifying and building my own pedals I thought it might be fun to build one. I understood that my favourite Muff tones came from a Big Muff that was only in production for a few years too – the Version 2/3 Opamp Big Muff made in the late seventies. These are quite different to other Big Muff builds over the years, which used transistors. The Opamp models differ in tone, in that they are slightly less fuzzy, cut a little better in a live setting, and aren’t as smooth when it comes to sustain. I decided that if I were to build a Big Muff that it would be the Opamp model.

Just around this time I noticed in my inbox that GuitarPCB.com were having an introductory 2 for 1 sale on their newly released   Big Muff Pi  – Opamp – “Tonmann Enhanced Version” DIY PCB. I jumped right on this, figuring that since this was my first build from scratch on a PCB that if I stuffed up one I at least had another to work with.

Once my Big Muff PCBs arrived I headed off to my local electronics store with my list of parts, and got to work on building the circuit. GuitarPCB.com PCBs are very nicely built, and working with the Opamp Big Muff was a breeze, even for an electronics newbie like me. I was able to work out a few things that confused me with the PCB layout through the helpful GuitarPCB.com forums. There are plenty of helpful sticky threads on how to build pedals from their PCBs, and model specific threads for assistance building each model PCB.

I was extremely happy when I wired up everything and the Big Muff worked first time. The tone was just as I expected, massive thick roaring tones that sounded like they lept straight out of Siamese Dream. In fact the first songs I tried playing through the Opamp Big Muff was the Smashing Pumpkins tracks “Today” and “Cherub Rock”, and the tone was just as I hoped. It was very easy to dial in, as you would hope from a 3 knob distortion/fuzz circuit. The tone control had a nice wide range, from thick bass-heavy, to the muff-standard scooped mids,  to piercing highs

As I always find nowadays with pedals I want to tweak them  to suit myself a bit better, and make them a bit more versatile. Seeing as the Opamp Big Muff is quite a bit different to the other Big Muff variants, the usual mods that are all over the Internet don’t quite apply here. Thankfully the community at GuitarPCB.com are extremely knowledgeable, helpful, and patient.

Despite the Opamp Muff circuit being a bit friendlier in live situations I still found that the mids were still too scooped for my liking, and I wanted to attempt to try and get a ‘tighter’, more overdriven type of distortion tone sometimes. After doing research on how to achieve this sort of thing with the regular transistor type Muff circuits I started to pose questions on how to do this with the GuitarPCB.com circuit. A number of people in the community were able to help me with ways of achieving this, and in the end I added two new switches to the circuit; a mid scoop/peak switch, and a loose/tight fuzz switch.

I managed to successfully dial in the peaked mids to my liking first go, and it’s pretty much where I leave my Muff circuit set. I’m still playing with capacitors to dial in the “tight” fuzz setting. I won’t go into details on the mods here, as this is my review, but I will discuss them in a future DIY post.

Older model Big Muffs have had a tendency to be noisy  buggers, and suck tone when bypassed. This is due to cheaper components such as  carbon resistors, ceramic capacitors, and a buffered bypass design that’s not the greatest. The design of the GuitarPCB.com Muff circuit makes wiring up a true bypass 3PDT switch a breeze, and I chose to use film capacitors where possible, so noise is not an issue with this pedal, unless you are using it on a dirty channel, where any distortion/fuzz pedal is going to make a lot of noise. I was really impressed by the lack of noise my Muff circuit made when maxed out on the clean channel. In fact, you’d be hard-pressed to hear any noise when no notes are played.

Overall, building the GuitarPCB.com Big Muff Pi  – Opamp – “Tonmann Enhanced Version” has been a great experience. A well made PCB, and a fantastic community behind it make for a great combination for success. I look forward to building some more GuitarPCB.com projects soon.