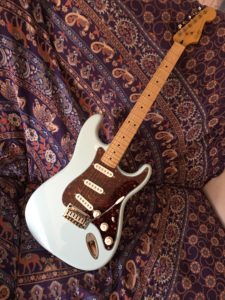 I recently received a 2018 build Squier Deluxe Stratocaster in Daphne Blue. These  are considered a real bang for buck guitar, and are sorely missed from the current Squier line up. I went with one of these models as I wanted a “classic” looking colour, and a single coil setup with regular single coils. I’ve got my black Bullet Stratocaster with singles, but they are loaded with high output DiMarzio stacked humbuckers, so it’s not really a vintage sounding strat.

The Deluxe models can be hard to find on the used market, being that they are quite popular, so finding one was a bit of a chore. Unfortunately the one that I found in my price range needed a bit of work. It didn’t look like anything too difficult to take care of though. From the Ebay listing it looked as though a previous owner had tried to relic it, with varying degrees of “success”. The neck had been yellowed, but was kind of spotty and uneven. Hardware was looking rough, to say the least, especially the tuners and output jack and plate. It had also been modified with what I consider a horrid tortoiseshell pickguard and back plate. I figured that the neck would need to be sanded back, and have the decals made up and re-applied , the hardware polished up and cleaned, or replaced, and the pickguard would have to go.

My US-located friend Ryc was happy to make the purchase on my behalf, and to inspect, and sell on elsewhere if I wasn’t happy with the condition. Once it arrived he gave it an assessment, and whist the tuners were pretty much ready to bin, the rest of the guitar appeared good to go. He then sent it on to me, and it arrived last week.

Once it arrived I first had a look over the neck. I didn’t want to have to re-do the satin clear, as I would have to worry about finding, and placing decals to match the stock Squier ones. I wanted to keep this guitar looking mostly like it did when it came off the factory floor.

Looking closer at the “tinting” on the Squier’s neck, it looked as though whatever was used to darken the neck was put on over the top of the clear coat. I’ve used isopropyl alochol in the past to clean up my Ibanez PGM301’s neck, so I figured that I’d give that a go with cleaning the neck. The tinting started to come off with a lot of elbow grease. It was safe to use over the decals on the headstock, since they were under enough clear coat. Combined with a little 0000 steel wool for the tough to scrub spots, and I managed to get almost all of the tint off. I even gave the frets a quick polish while the neck was off the guitar. There’s still a small amount of “tint” around the frets, but the neck looks almost factory fresh now. I’ll clean the rest off during string changes.

Removing the stock tuners was a bit scary. They were extremely rusty, which was a bit of a worry. The movement of the tuners was very off, which is a bit odd for sealed tuners. They felt worse than the mediocre trapezoid tuners found on the Bullet series Squiers. With this, and the rust I became a little concerned that the guitar was not the victim of a bad relic job, but of water damage.

I got the Graphtech Ratio tuners that I had spare installed. Fitment was a breeze thanks to the identical shaft diameter and two pin layout. The neck is almost looking factory fresh. The nut looks a bit to splotchy from the “tint”, and I’d prefer some nicer string trees, so they’ll be done soon.

Next up was dismantling the bridge and cleaning it up. I’ve used Autosol metal polish to restore plenty of guitar hardware in the past, so I knew that I should be able to get all of the parts looking good again. More rust was found under the saddles, which further pushed my theory of water damage.

Cleaning up the baseplate, screws and springs was pretty easy, and the result was an almost new looking bridge. A couple of the saddle screws looked a little bent, but they should hold up for now at least. I’m considering getting some vintage style bent-steel saddles later down the track, so they may not stick around for too long anyway. I definitely want to upgrade the sustain block at some point too.

The neck plate was looking a little tarnished as well, so that was given a quick wipe down with the Autosol too.

Next up was the output jack and jack plate. It was clear that the jack plate was too far gone, as it had worn through to the base metal in some spots. The jack appeared to be too far gone at first, because the nut would not come loose. Some WD40 managed to loosen the nut, and after disassembly and clean up the jack came up good. The stock jack plate from my Bullet strat would be the ideal replacement for the corroded mess that was the Deluxe’s jack plate.

The next step was to replace the hideous tortoise shell pickguard with something similar to what the guitar came with. I figured that a parchment guard with white pickups and control knobs would look perfect. I also had some Seymour Duncan Jimi Hendrix signature strat single coils on hand, just waiting for a guitar to reside in. The Duncan Designed SC-101s are a nice modern sounding stratty pickup, but I really wanted to go for a vintage vibe with this guitar, so the Hendrix pickups were a perfect pick to get this guitar into the zone.

For now I planned to use the stock wiring harness, as I wanted to minimise extra parts being purchase, but I discovered more signs of potential water damage under the guard. The stock volume pot had signs of corrosion, making de-soldering anything on the base of the pot next to impossible. Thankfully I had a spare 250K pot to use in it’s place. A quick wire chop and de-solder later, and I had my replacement in the harness.

With the loaded pickguard installed, and the rest of the clean up mostly done, the Deluxe Stratocaster finally looked the way I was aiming for, and looking as new as it should have for a guitar that was only around a year old. There’s still a little set up work required, and I feel like the nut may be cut a little too low, but for now, bar a replacement nut, I feel the guitar is good to go. I can’t wait to properly delve into the tones accessible with this guitar and pickup combination. Here’s hoping a more vintage style strat generates some excellent inspiration for my playing and writing.